Why do thoughts of death make people more religious?

Are there atheists in foxholes? It’s another fascinating topic that has seen quite a lot of development over recent years. The study that kicked it all off was one by Ara Norenzayan and Ian Hansen, at the University of British Columbia.

They found that subliminal reminders of death caused their subjects to report being more religious, which suggests that fear of death actually strengthens belief in God. Over the years, many people have used studies like this to suggest that everyone – atheists included – instinctively turn to god when they feel threatened.

But do they? Well, maybe not and the answer to this question is vital in order to understand he mechanism that links thoughts of death to heightened religiosity.

Kenneth Vail and Jamie Arndt (University of Missouri–Columbi, USA) and Abdolhossein Abdollahi (Islamic Azad University in Iran) set out to explore this effect in a series of studies in Christian, Muslim, and atheist and agnostic students.

They asked half their subjects to write down their thoughts about their own death, and the other half to write about a neutral topic. Then they asked them how religious they were, and also their attitudes to Buddah, Allah, and the Christian god. 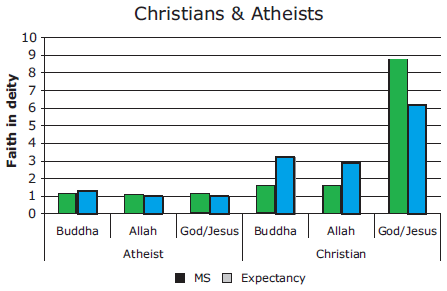 You can see the results for Christians and atheists in the graphic (MS means mortality salience – i.e. primed with thoughts of death). Atheists are pretty non-religious and don’t really believe in any gods, whether or not you make them think about death.

Agnostics, however, were different. They had fairly low levels of belief, but this increased after being reminded of death – but it increased for all three gods!

All in all, this is more support for the idea that the reason that some people turn to religion when faced with death is not that fear increases their belief in supernatural beings in general (and life after death and all that goes with it).

Rather, what is probably happening is something called ‘worldview defence’. This is a quite well known effect: when people feel threatened they ramp up their support for the culture and values of their own group, and reject foreigners and all their dark ways.

A similar effect was reported by Jonathon Jong earlier this year.

But what explains the increased belief of the agnostics? They may well be an example of how fear of death can increase belief in the supernatural in general – but only in people who are open to the idea of religion yet not committed to any particular one.

Perhaps these agnostics are taking up Pascal’s Wager!

July 15, 2012
Does education mean more or less religion? It depends on the country
Next Post

July 25, 2012 Letting God do the punishment for you
Recent Comments
0 | Leave a Comment
Browse Our Archives
get the latest from
Nonreligious
Sign up for our newsletter
POPULAR AT PATHEOS Nonreligious
1