Letting God do the punishment for you 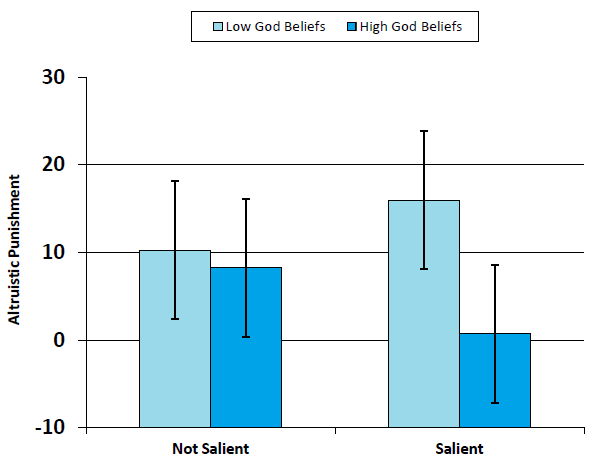 There are lots of stereotypes about the attitudes of religious people to punishment.

But which stereotype is most accurate?

Kristin Laurin, at the University of Waterloo in Canada, sought to find out by looking at a behaviour known as costly punishment. This is when an individual punishes a wrongdoer, even though there is no overall benefit to the individual themselves. So the individual incurs a cost (the effort and sometimes risk involved in punishment), in order to do the community as a whole a service.

Costly punishment is interesting to behavioural psychologists as it’s hard to make sense of it from an evolutionary perspective. Looking at it in a straightforward way: if you don’t benefit, then you would be better off not punishing, and letting the wrongdoer go free.

One typical experiment involves three players. Player A gets $20, and is told to share as much or as little as they want with Player B. Player C is the costly punisher. Player C gets $10 and can spend as much of that as they want punishing Player A. For every $1 they spend, Player A loses $3.

So Player C can spend some of their money just for the satisfaction of punishing Player A, if they feel Player A is not being generous enough.

Now, all of this is done anonymously – nobody knows who was Player A, B or C (in fact, through an experimental sleight of hand, everyone who took part actually played the role of Player C!).

What they found was that players who said they were more religious tended to punish more.

However, belief in a powerful god (one that is as least partly in control and has some kind of plan for the universe) had the opposite effect!

In other words, these two different aspects of religion had opposing effects – religious attitudes increased the motivation to punish, while god beliefs decreased it.

They tested this finding pretty rigorously. First, they found that it only worked if you asked about religious attitudes and beliefs before taking the test. That means that these ideas had to be prominent in their minds to have any effect.

And this in turn means that we can be fairly confident that it is religion causing these attitudes, rather than the other way around.

They also did a similar study, but asking about a real-world case – a business executive who stole from the company to feed his gambling habit. How much of their tax money would they want devoted to catching and punishing him? The result was similar.

They also ruled out a couple of other explanations (although only using a small group of 25 students, it has to be admitted). Still, they found that in this group, there was no evidence that people who believe in a powerful god also think that punishment is wrong in principle (in fact, they found the opposite). And they ruled out the possibility that these people don’t believe in free will – and so don’t see the point in punishment.

Laurin and colleagues conclude that what is happening here is that people who believe in a powerful god are ‘outsourcing’ punishment to God. After all, why endure the cost of inflicting punishment, if you can be confident that God will do it for you?

Now, this has all sorts of interesting implications. They propose that the invention of moralistic, punishing gods (which, they argue, are a creation of large societies), may have helped these large societies develop. By reducing the costs of punishment, but maintaining co-operation through the threat of divine punishment, society could have become more efficient.

I’m a bit sceptical of that idea. It doesn’t square with what I know of classical and medieval Europe – which often had an obsession with punishment that bordered on the pathological.

Another thing: as they found in this study, religion is complex, and the net effect of religion is often unclear. It seems likely that religion can serve to both increase and decrease costly punishment, depending on precisely how it is formulated in any given society. And that means that means that religion is a cultural tool that can be used to amplify different behaviour. but it is not necessarily linked with any particular one.

And one last factor to consider is that it’s still not clear whether costly punishment is in fact beneficial to societies or individuals (e.g. Rankin, 2009). Even if it is, it is probably only helpful under certain limited conditions (like when societies are pitched against each other in conflict – dos Santos, 2011).

All of which makes me wonder whether belief in a powerful god is attractive to individuals because it allows you to ‘cheat’ on your societal obligations – perhaps ones that are honed by evolution to be hard-wired into our psyche.

And if endless rounds of punishment, retribution and cruelty, driven by our base instincts, are, in fact, damaging to society? Well then perhaps the invention of powerful gods did help to give birth to our modern societies – just not in the way that you might at first expect!

July 19, 2012
Why do thoughts of death make people more religious?
Next Post