There’s quite a lot of research showing that subtly reminding people of death can make them more religious (here’s an example). But what’s not clear is why that should be – and in particular whether non-religious people also become more religious.

Jonathan Jong, a new PhD from the University of Otago in New Zealand, has conducted a series of fascinating studies to investigate just this. You can find his thesis here – there’s a lot in it, but here’s two key studies that will make you think. 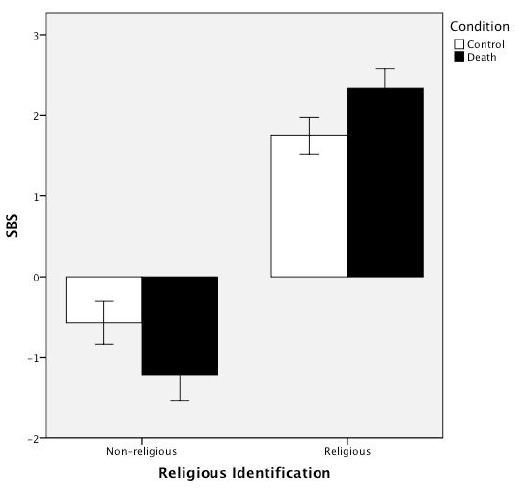 In the first study, Jong asked students to write either about what they thought would happen to them when they die (the death condition), or about watching TV (the control condition). Then he asked them a series of questions about religious beliefs (with a Christian slant) – the Spiritual Belief Scale (SBS).

You can see in the figure that religious people have, as you would expect, high levels of belief in the supernatural – and this increases still further in the ‘death’ condition versus the TV condition.

Non-religious people had lower beliefs to start with, and they got lower still after death reminders. They become stronger in their rejection of religious beliefs.

OK, so far so good. But this is just what people are saying – and what people say and what they think instinctively are not necessarily the same.

So then Jong ran a version of the Implicit Association Test. This is basically a computerised quiz in which you have to classify words into different groups. Some classifications go against your instinctive beliefs – and these classifications will make you stumble a little, and so take you a little bit longer.

So, in this case, the subjects had to classify supernatural (Angel, Devil, God, Heaven, Soul, etc), real (Eagle, Helicopter…), and imaginary (Batmobile, Fairy, Genie, Mermaid, Narnia) entities as either real or imaginary. For the the non-religious, being asked to classify supernatural and real objects together as real, and distinct from imaginary objects, is tough to do. It goes against their instincts, and so they took significantly longer to do it.

However, if they were primed with death thoughts before hand, they found the task easier. In fact, the improvement in speed was pretty much as large as it was for the religious. What this suggests is that the idea that supernatural entities are real is easier to contemplate for everyone – including the non-religious – if they have been thinking about death.

Jong thinks that what we’re seeing here is evidence that reflective, conscious thoughts can be decoupled from instinctive, implicit beliefs.

What may be happening is that all of us – religious and non-religious alike – have a kind of innate response to the fear of death that makes us more accommodating to the idea of supernatural beings (at least, those ones that are culturally accepted as possibly real and not complete fantasies).

Countering this, on the other hand, is something called Worldview Defence. This is the well-known phenomenon that when we are reminded about death, we tend to cling onto comforting, reassuring beliefs about the world. We become more positive about our own ethnic group or nation, for example, and more hostile to strangers.

For the religious, this also includes a heightened attachment to religion. For the non-religious, however, the reverse effect seems to occur.

For the non-religious, being reminded of death makes them instinctively more superstitious, but also overtly more hostile to religion!

March 15, 2012
Hostility to migrants in Europe is strongest among the 'culturally Christian'
Next Post

March 24, 2012 Fear of death is highest among Muslims
Recent Comments
0 | Leave a Comment
Browse Our Archives
Related posts from Epiphenom