Recollections of childhood religion: your past becomes like your present

Recollections of childhood religion: your past becomes like your present August 17, 2012 Epiphenom 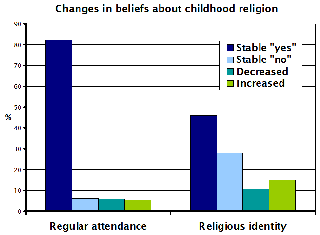 Trying to work out why and how religious beliefs change over their lifetime is challenging because hard data are rare. Instead, researchers often have to resort to asking adults what they believed when they were children.

Of course, everyone knows that such memories are not 100% reliable, but just how unreliable is hard to judge. David Hayward, at the University of Michigan, and colleagues, have been able to quantify it by using data from a survey that’s been running in Rhode Island since 1959.

The survey was conducted in waves, starting with mothers and their infant children, and then following up with three further surveys (the most recent was in 2001). In each survey, they asked about current religious behavior (“Do you regularly go to a church or other place of worship?”) and current religious identity (“Do you consider yourself a religious person?”). Crucially, they also asked about retrospective childhood religious behavior and retrospective childhood religious identity.

What was interesting is that recollections of childhood religion also changed.

This pattern of results is consistent with predictions based on self-appraisal theory. Because we are motivated to see ourselves as basically stable on important dimensions across the life course, and to reduce perceived dissonance between past and present selves, it is likely that when people reevaluate their religiousness they tend to harmonize past identities with present ones.

That wasn’t the case with childhood religious behaviour. Perhaps that’s because behaviour is more objective, and can be independently verified. But maybe it’s also because your past behaviour is easier to explain away.

For example, if you don’t go to church now, you can explain away your childhood church going as simply the result of family pressure. SImilarly, current churchgoers can justify their lack of attendance in childhood as a result of family shortcomings.

Hayward RD, Maselko J, & Meador KG (2012). Recollections of Childhood Religious Identity and Behavior as a Function of Adult Religiousness. The International journal for the psychology of religion, 22 (1), 79-88 PMID: 22844186

August 9, 2012
Religion and ethnicity reinforce each other to create distrust
Next Post