Religion and ethnicity reinforce each other to create distrust

Religion and ethnicity reinforce each other to create distrust August 9, 2012 Epiphenom 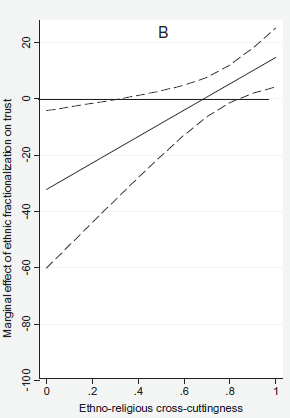 Well, surprise, surprise. It turns out there is an element of truth in both perspectives.

Henning Finseraas and Niklas Jakobsson, from the Norwegian Social Research Institute NOVA, used the World Values Survey, which included one question that asked: “In general, do you think that most people
can be trusted, or can’t you be too careful in dealing with people?”

What they found was that ethnic divisions by themselves did not seem to be linked to more distrust.

However, when religious and ethnic differences aligned (so that people of a different ethnicity usually also had a different religion), then there were high levels of distrust.

You can see that depicted in the figure. Basically, what it shows is that as ethnic-religious ‘cross-cutting’ increases (i.e. as ethnicity becomes less closely aligned to religion), the negative effect of ethnic divisions on trust goes down.

In fact, in totally mixed societies where there is little or no connection between ethnicity and religion, there may even be a positive effect on trust (although this was not statistically significant).

Overall, what this suggests is that looking at societal divisions through a single prism – whether ethnicity, or religion, or something else – is not going to give you a useful picture. Rather, you need to look at how these divisions reinforce or counteract each other.

August 17, 2012 Recollections of childhood religion: your past becomes like your present
Recent Comments
0 | Leave a Comment
Browse Our Archives
get the latest from
Nonreligious
Sign up for our newsletter
POPULAR AT PATHEOS Nonreligious
1