This is actually a study from the middle of last year that I never got round to covering (there was a run of studies from the same team, and this one ended up at the bottom of the pile!). But I’m glad I did.

The second looked at a group of Canadian students, and found that those who reported more symptoms of autism were also less religious. Study Three broadened this out to a group of 725 American Adults recruited via Amazon’s Mechanical Turk, while Study Four looked at a different sample of 425 Adults (they were part of a paid survey panel).

Again and again, they found that symptoms of autism correlated with lack of belief in God.

But their analyses went further. They also asked them about their empathy (using questions like “I often find it difficult to judge if someone is rude or polite” and “I am good at predicting how someone will feel.”). 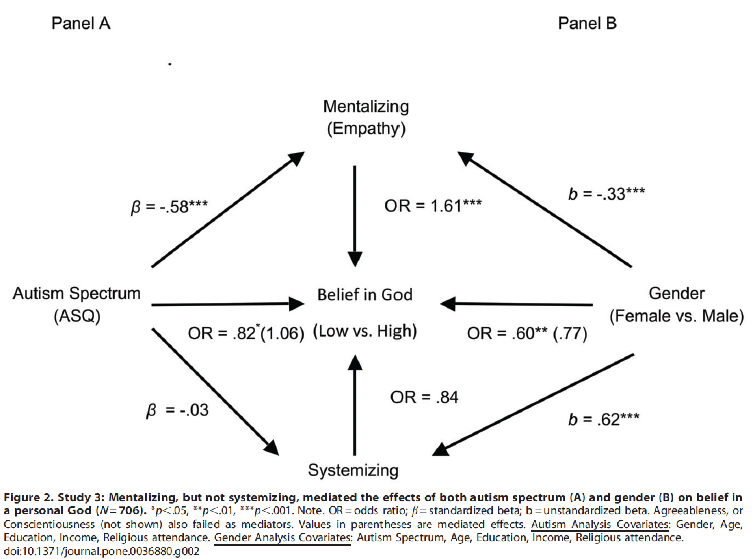 They found that empathy also correlated with belief. Not only that but, using a statistical technique called “bootstrapping”,  they found that the most plausible explanation for the correlation was that autism was related to a lack of empathy, which in turn was related to lack of belief (see the figure).

In other words, lack of empathy was the ‘in between’ factor that mediated the relationship between autism and lack of belief.

Now, they tested a bunch of other potential explanations too. For example, they also measured something called systemizing, which is all “about aptitude for, and interest in, reasoning about mechanical and physical objects and processes”, and is measure using questions like “‘‘I am fascinated by how machines work,” and “I find it difficult to understand information the bank sends me on different investment and saving systems”.

Like empathy, systemizing is correlated both with being male and the degree of autism (although in the opposite direction: autistics are better at systematizing than neurotypicals). But, unlike empathy, it wasn’t found to “mediate” the effect autism on religion.

They also looked at aspects of personality (Agreeableness and Conscientiousness), and assessed whether church-going was relevant – the idea here being that going to church with a group of other people might simultaneously improve empathy and increase belief in God. But none of these could explain the effect.

In the fourth study, they also tested another measure of mind-reading. In this one, the participants were shown pictures of eyes and asked to pick out which words best describe what the person in the picture is thinking or feeling. Again, high ability on this task was found to mediate the relationship between religion and autism.

So, in the end, this is really good evidence that, at least in the kinds of religion favoured in the USA, an inability to empathise and read other peoples minds is linked to decreased belief in personal gods. But why might this be?

Well, actually it fits well with other research which finds that loneliness can increase belief in the supernatural. And it also fits with brain imaging studies that found that highly religious people who engage in personal prayer use the same parts of their brains as they would when talking to a good friend.

So it seems that an essential part of the belief in a personal God is the ability to relate to it as a personal friend. It perhaps then isn’t surprising that people whose minds don’t work that way are less likely to believe.

January 27, 2013
In Iran and the USA, the "religious person" has a similar personality
Next Post