In Burkino Faso, traditional beliefs encourage trust and fair-play in the small-business community

Village life in sub-Saharan Africa is governed by a moral code enforced by customs, regulations, and taboos. Because communities are close-knit, large discrepancies in wealth are frowned upon, and the accumulation of private wealth is regarded as anti-social.

Locals believe that spirits and ancestors enforce this moral code, and that transgressors will be punished by misfortune, business failure, and severe illnesses or accidents. But does this actually have any effect on behaviour?

Myriam Hadnes and Heiner Schumacher, at the University of Frankfurt, recruited a bunch of ‘micro-entrepreneurs’ from the villages around Ouagadougou and asked them to play an economic transaction game, to see how generous and trusting they were towards others.

The game has two players – both anonymous, both given 1000 West African Francs (worth just over 2 dollars – about a day’s pay at minimum wage levels). Player A could either keep his money (in which case both went home with their 1,000 Fcfa) or give it all to Player B.

If Player A chose to send the money, then it was doubled so that Player B now had 3000 Fcfa. Player B could then send back as much as he or she wanted. After that, they went home.

Before playing the game, the players were interviewed about their businesses. For half the participants, the interviewers asked about jealousy and traditional rules about conduct, and deliberately steered the conversation towards supernatural topics. For the other half, they focussed on practical issues of business – and deliberately avoided anything related to supernatural topics.

They found that, in the group that avoided supernatural topics, 69% of ‘Player A’ participants handed their 1,000 Fcfa to Player B. In the group that did discuss the traditional beliefs, that figure rose to 87%. That suggests that these players were more trusting that Player B would play fair. 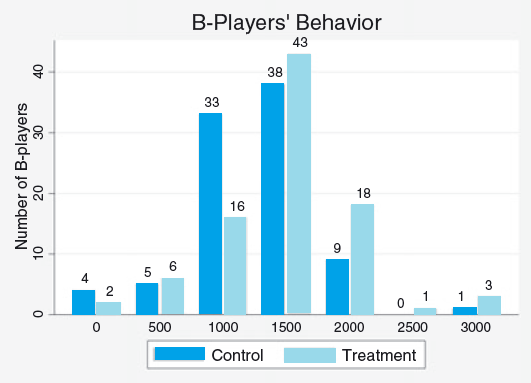 Then they looked at what Player B gave back in return, and found that they were significantly more likely to give higher amounts (see graphic). In fact, while the group that did not discuss the supernatural returned on average 1,261 Fcfa (or 42 percent), those primed with traditional beliefs returned 1,471 Fcfa (or 49 percent).

That suggests that, in both groups, the A players’ trust was well placed – but that this was particularly so in the group primed with tradition. That difference was statistically significant, even after adjusting for other differences between the groups.

The authors point out that this is unlikely to be simply due to increased trust (because they found that the A players didn’t actually expect more in return, and also that doesn’t explain why the B players were more generous). Nor was it because they were less risk-averse (again, that can’t explain the B-players response).

Instead, they say that:

… our results suggest another factor as the driving force of both the A- and B-players’ behavior.

In the postexperimental questionnaire, one-third of all participants explicitly cited illness, accidents, or death as direct consequence of dishonest behavior. In the interviews of the treatment group, participants shared their experiences with supernatural forces intervening into worldly life to punish those who did not respect the ancestors’ will. Almost half of the participants stated having witnessed a case of supernatural punishment aftermisbehavior.

Also, we learned that participants trust witch doctors to influence their business success, and fear the neighbors’ and competitors’ envy if they are successful without caring for their kith and kin.

In line with these observations, we argue that A- and B-players’ behavior was driven by the combination of prevailing sharing norms and the belief in supernatural punishment whenever these norms are violated.

Because of the design of this study, we can’t tease out whether this was a direct effect of supernatural fears or not. The interviews of the A players covered both social norms and supernatural topics (they couldn’t use the more usual priming technique of asking the participants to do a word game, because most were illiterate), so either or both could be affecting the result.

But as the first evidence that reminders of traditional moral beliefs, coupled with supernatural threats, can result in behaviour that’s significantly more pro-social!

February 24, 2013
Why do the religious have a problem with outsiders
Next Post