Anonymous games of reciprocity and trust are common devices used in the study of religion. Usually the games are set up so that, if you were ruthlessly logical, you shouldn’t share anything. The fact that people often do is intriguing.

Andreas Lechner, at the University of Augsberg in Germany, has employed a more complex variant of this game that includes a third person – the punisher. You can download the working paper here. The basic gist of games is shown in the figure. 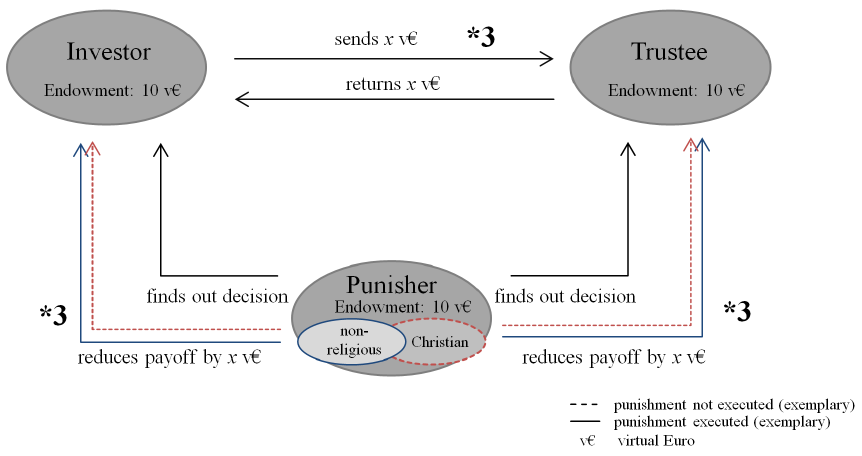 Except in this game, because they couldn’t use real money  (Lechner doesn’t say why), it was played with pastries and candies

Now, because this is all done anonymously, and only played once, the logical thing is that the Trustee will keep whatever is given, and the Punisher won’t do anything no matter what. So the Investor, knowing this should invest nothing.

That’s not what happens in reality, of course. And what Lechner wanted to know is whether having religious punisher made any difference.

So he ranthis experiment using 144 students, using a fairly cunning experimental design to maximise the amount of useable data

And what he found, for the most part, was that it really didn’t matter if the punisher was religious or not.

Christians didn’t punish those who were not trustworthy (i.e. did not return a reasonable amount of the investment). And there was no difference between Catholics or Protestants.

There was an interaction between religious punishers and the punishment meted out to  those who weren’t trustworthy (that is, trustees who did not reciprocate by  the trustee did not reciprocate).But it’s not what you would expect.

Frequent attenders at religious services were more likely to punish those who were trusting.

Yes, that’s right. Those who investors sent over a large sum were more likely to be punished if the punisher was a Christian. What’s more these churchgoers were themselves less trusting.

it appears as religious service promotes distrust, so that trust is punished increasingly with higher attendance rates … This finding could be due to a lower trust in strangers by religious individuals

Although he does go on to point out that scientific support for that idea is a bit mixed, it certainly seems plausible.