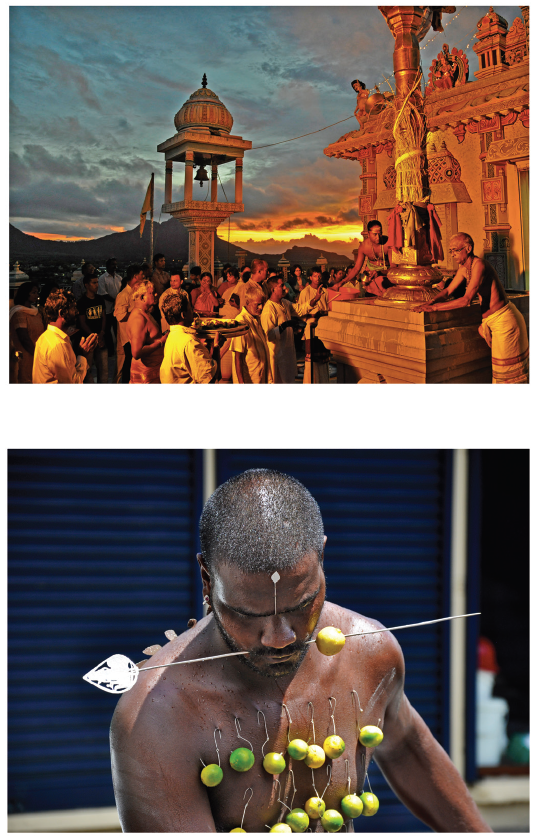 We last met Dimitris Xygalatas (Aarhus University, Denmark) on this blog back in January, with a study of how being in a religious location can affect generosity. What was interesting about that study was that it was done in a non-Western country (Mauritius), with people from a diverse range of religious backgrounds.

In a new study, he (along with colleagues from New Zealand, the Czech Republic, and Denmark) found evidence that extreme religious rituals can stimulate increased generosity – this time focussing on the Hindu community of Mauritius. The authors explain:

We examined two rituals that were part of the annual Hindu festival of Thaipusam, one of the most widely celebrated religious festivals the world over: a low-ordeal ritual involving singing and collective prayer (top picture) and a high-ordeal ritual (Kavadi; bottom picture) involving body piercing with multiple needles and skewers, carrying heavy bamboo structures, and dragging carts attached by hooks to the skin for over 4 hr before climbing a mountain barefooted to reach the temple of Murugan.

Along with the people who actually took part in the two different kinds of rituals, they also studied a group of Kavadi observers (nonperforming participants who walked alongside performers, are often related to them and have themselves previously taken part in he ritual).

After the event, all the participants and observers were given a questionnaire, and also given the opportunity to make an anonymous donation to the temple. 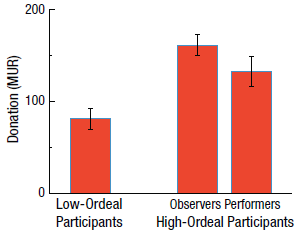 They found that those who had taken part in the extreme ritual, as well as those who had observed it, donated more to the temple (as shown in the chart, which shows the average amount of donation in Mauritian rupees).

And it seems the painfulness of the ordeal was an important factor – the more pain the worshipper reported, the higher the donations. That went for the observers, as well as the active participants!

Intriguingly, the high-ordeal participants also had a more inclusive social identity. They were more likely to say that they felt themselves to be Mauritian, rather than Hindu.

Now, of course it’s hard to tease out cause and effect in a study like this (are more generous, more inclusive people more likely to undertake painful rituals?). But either way, it’s a pretty remarkable result.

I would have predicted exactly the opposite. The high-ordeal participants have already made their contribution – and because people tend to total up their good deeds and balance them out with bad ones (which may be why Christians don’t tip so much after Church services), I would’ve expected those who had suffered for their faith to personally donate less.

These results suggest that costly displays of group commitment (though apparently wasteful) may be conserved because they intensify prosocial behaviors and attitudes among the wider community (Henrich, 2009; Sosis & Bressler, 2003).

Which is all well and good, but runs up against the basic evolutionary problem we always have when the group benefits but the individual suffers. The problem is that it’s always better for you as an individual to duck out (see: Religion as a costly signal: why the idea is bunk).

If, however, by undergoing a painful ritual you persuade others to make sacrifices that somehow (directly or indirectly) benefit you, then it might just work…

One last thing. Why, do you suppose, the extreme ritualists ended up feeling warmer to society as a whole, rather than just to their co-religionists? After all, someone dedicated enough to skewer themselves in the name of their gods must surely have religious identification pretty high on their list of priorities?

Well, perhaps it’s to do with the fact that Mauritius, although a pretty mixed society by global standards, is still predominantly Hindu. The authors say:

…identity always functions in a social context (Tajfel, 1984). In the context of a public ritual that recognizes the Hindu majority group, situated in a larger community whose members hold multiple identities, ritual intensity enhanced the superordinate national identity