12 Simple Differences Between Catholics and Protestants

The rapid rise of the “Nones” — those unaffiliated with religious groups — was back in the news this week, when the Pew Forum on Religion and Public Life released its most recent study on American religiosity. Here’s what Pew had to say:

The number of Americans who do not identify with any religion continues to grow at a rapid pace. One-fifth of the U.S. public – and a third of adults under 30 – are religiously unaffiliated today, the highest percentages ever in Pew Research Center polling… Their ranks now include more than 13 million self-described atheists and agnostics (nearly 6% of the U.S. public), as well as nearly 33 million people who say they have no particular religious affiliation (14%). 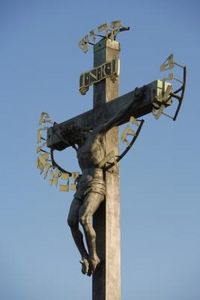 In addition, the group emphasized that, for the first time in history, there is no Protestant majority in the United States. That is, Protestants have dropped to 48 percent, whereas they comprised 53 percent of the public as recently as 2007 — a drop of 5 percent in five years. (Catholics, by comparison dropped 1 percent during the same time period — to 22 percent). As you all know, Protestants are Christians who broke off from the Catholic Church 500 years ago. Although there are more than 33,000 (!!) Protestant denominations, all of them still operate in ways that are separate and distinct from the Catholic Church. But what are the differences, really? I mean, all Christians Churches hold the same core value: Jesus Christ was the son of the God who died for our sins, arose from the dead, and ascended to heaven. Isn’t the rest just window-dressing?

Twelve Differences Between Catholics and Protestants:

1. The Pope. Catholics have a Pope, which they consider a vicar for Christ — an infallible stand-in, if you will — that heads the Church. Protestants believe no human is infallible and Jesus alone heads up the Church.

2.  Big, Fancy Cathedrals. Catholics have them; Protestants don’t. Why? Well, Catholicism says that “humanity must discover its unity and salvation” within a church. Protestants say all Christians can be saved, regardless of church membership. (Ergo… shitty, abandoned storefront churches? All Protestant.)

3. Saints. Catholics pray to saints (holy dead people) in addition to God and Jesus. Protestants acknowledge saints, but don’t pray to them. [Note: There is much debate about the use of the word “pray” in this context, so let me clarify: Saints are seen by Catholics as an intermediary to God or Jesus. Although Catholics do technically pray to saints, they are not praying for the saints to help them directly but to intervene on their behalf. They are asking the saints (in the form of a prayer) to pray for them. It’s like praying for prayers. Hope this helps.]

5. Celibacy and Nuns. Catholics only.

7. Scripture: The be-all, end-all for Protestants is “the Word of God.” For Catholics, tradition is just as important as scripture — maybe even more so.

10. Sacraments: Catholic are the only ones to have the concept of the seven sacraments (baptism, confirmation, the Eucharist, penance, anointing of the sick, holy orders, and matrimony). Protestants teach that salvation is attained through faith alone.

11. Holidays: Catholics have 10 Holy Days of Obligation (which mean they must go to Mass). Protestants are more like, “Just come to church on Christmas, that’s all we ask.”

June 6, 2013
It's Not a Competition: 8 Tips for Interfaith Parents
Next Post

June 13, 2013 Believers Behaving Badly
Recent Comments
0 | Leave a Comment
"This is really good. It encourages our Christian Authors to have their works published! Much ..."
Don Davies Evangelical Authors Buy Their Way onto ..."
"Hi Jackie, Similar experience here minus the kiddo. My parents literally cornered us on the ..."
Esther 7 Tips for Dealing with Religious ..."
"...Columbus was not a heroic discoverer, but an amoral criminal...Don't forget that he was a ..."
Eberhardt von Hessen In 1492, Columbus Did Things One ..."
"An obvious left wing slant on Catholicism by someone who obviously is not Catholic and ..."
jonny 12 Simple Differences Between Catholics and ..."
Browse Our Archives
Related posts from Natural Wonderers