Earlier this year, there was huge kerfuffle over some Pastor in the US who refused to leave a tip in a restaurant. By way of explanation, he wrote on the bill that he already gave “10% to God”. Something that I never realised (coming from Europe as I do, where we don’t really do tipping) is that Christians already have a reputation for being bad tippers – especially on a Sunday.

But is that reputation deserved? Michael Lynn, at the School of Hotel Administration, Cornell University, Ithaca, and Benjamin Katz (HCD research) ran a survey of 1,600 U.S. adults to find out. 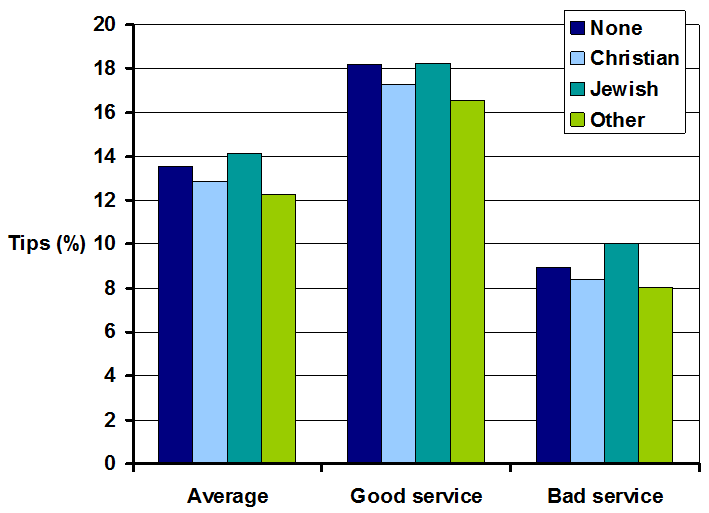 What they found was that, regardless of whether the service was good or bad, Christians really did report leaving lower tips that the non-religious (and Jews).

In fact, as they point out, Christians are the overwhelming majority – so what’s actually happening here is that the non-religious and Jews are leaving higher tips than average. What’s more, they say:

…if you define poor tippers as those leaving less than a 15% tip for good service, then only 13% of Christians are poor tippers.

Granted this percentage is higher than the 7% of nonaffiliates
and 2% of Jews that would be classified as poor tippers under
the same criteria, it seems unreasonable to label an entire
group based on the behavior of only 13% of its members.

While that’s a fair point, it’s still a significant proportion, and the fact that Christians are twice as likely poor tippers as the non-religious is something that is likely to be noted by serving staff – especially if the worst tippers are also the most overtly religious.

But why should they be bad tippers?

Well, the non-religious and Jews tended to be wealthier and better educated than Christians, although the authors did adjust their results for all these sorts of factors and more.

What’s more, they found only a slight (and trivial) relationship between tipping and religious service attendance. That suggests that it’s not the extrinsically motivated (i.e. people who are into religion for social status and image) that are driving this effect.

The researchers don’t commit themselves to any explanation of the results, and point out as well that this is a survey rather than a test of actual tipping behaviour – although they reference other studies that have shown that surveys of tipping behaviour are quite reliable.

But it does match what was found in another study – this time a real world assessment – which found that churchgoers were more likely to steal newspapers, rather than put money in an honesty box.

Personally, what I think is going on here is the moral ‘set point’ at work – we have a natural inclination to balance good and bad deeds (it’s a bit more complicated than that, of course).

So the after all the effort that these Christians put in to pleasing their god with praying and all, well, they may feel that saving money by tipping less is a well-earned reward!