In the West at least, women tend to be more religious than men. You can argue about why this might be (and I think it’s an entirely sociological phenomenon) but it nonetheless seems to be a fact of life.

So, it’s in this context that you need to think about recent research by Kristina Durante at the University of Texas, and colleagues, which suggests that ovulatory cycle can have a significant influence over how religious women are.

They recruited 275 American women aged 18-44 years for an internet survey. Basically, they asked them what stage of their menstrual cycle they were at, and used that information to split the participants into two groups: high fertility (cycle days 7–14) and low fertility (cycle days 17–25).

Then they asked them how religious they were, whether they were in a committed relationship, an other general questions. 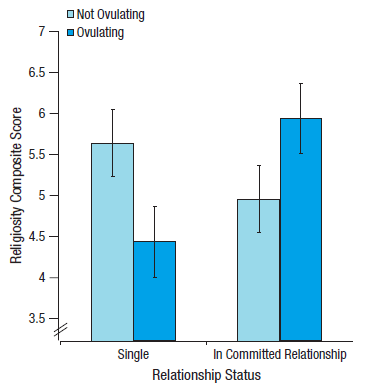 The results were fascinating. Women did indeed report different levels of religious feeling according to their fertility, but the direction of the effect was completely different depending on whether or not they were in a committed relationship.

Single women were less religious when they were most fertile, while women in a relationship were more religious.

Why? Well it single women tended to be younger and less likely to have kids. Perhaps that could have affected the results, although it’s hard to see how.

Durante reckons it’s some kind of subconscious safety barrier to prevent women in relationships from sleeping around:

We believe that the key difference between these two groups is that married or engaged women are more invested in their relationship and therefore would have considerably more to lose if their relationship were endangered. Increased religiosity and conservatism at ovulation may serve to deter married women from cheating on their spouse.

I don’t think that can be right. After all, from an evolutionary perspective, women in a committed relationship have more to gain from an affair when fertile (if it works out, they get genes from a different, and perhaps fitter, male, but retain the support of hubby) than they have when less fertile (noting to gain, everything to lose).

That, ostensibly, is why fertile women prefer macho guys – have a fling with a macho guy for the genes, then go back to dependable hubby to raise the resulting kid!

The reverse is the case for single women. Single women are better off procreating with a conservative male who is going to hang around to help raise the kid.

I reckon it’s simply down to sexual desire, which is also linked to the ovulatory cycle.

If single women want to get laid, then they have to do it outside of a long-term relationship – which means breaking social taboos about how women are supposed to behave. So, well, those taboos just so happen to be disregarded. These women become more liberal.

For women in a relationship their best chance of sex is with their current partner. So social rules that keep partners together just so happen to become much more important…