May 5, 2013 by Epiphenom
0 Comments
Religion doesn’t seem to protect against depression. May 5, 2013 Epiphenom

In most countries, religious people tend to be happier and less depressed, and it’s often suggested that religion somehow provides a happiness boost and protects against depression.

Maybe, so the thought process goes, religious belief alone is enough to perk people up, but even if it doesn’t then participating in religious gatherings, and the social support that goes with it – well surely that’s got to help.

It’s an attractive idea, but the problem is that it’s really difficult to unpick cause and effect. Maybe it’s simply that depressed people stop being religious. That’s certainly what a study that came out last year suggested.

About the only way to tease this out is to follow people over time, and see who gets depressed and who doesn’t. That’s what Michael King (University College London) and colleagues have done in a recent international study.

They interviewed 8318 patients without depression attending doctor’s surgeries in the Chile, Estonia, The Netherlands, Portugal, UK, Spain, and Slovenia. Then they interviewed them again 6 and 12 months later (well, most of them – some, especially the younger and less educated, didn’t turn up to later interviews).

They found that significantly more of the participants who actively practised religion (10.3%) or had a spiritual world view (10.5%) experienced an episode of major depression over those 12 months compared with those who had a secular outlook (7%).

Once they’d adjusted for differences in the characteristics of the people in the depressed and non-depressed groups (age, sex, education, employment, social support, past history of depression and country), only ‘spiritual world view’ (and not active religious participation) remained a significant predictor of future depression. And the country where this effect was strongest was the UK. 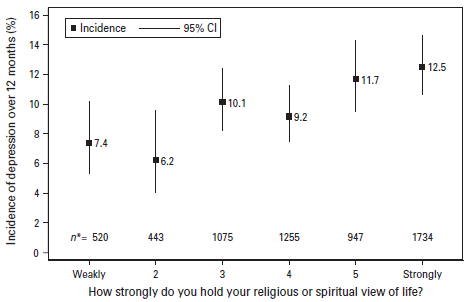 Although our main finding of an association between religious life understanding and onset of depression varied by country, we found no evidence that spirituality may protect people, and only weak evidence that a religious life view was possibly protective in two countries (Slovenia and The Netherlands). Finally, there was no moderating effect of religious and spiritual understanding of life on the impact of life events on onset of major depression.

So religion doesn’t seem to protect people from depression, and spirituality in the absence of religious affiliation seems to be a positive risk factor – especially in the UK.

That chimes with other studies (including a recent one by King himself [see references below], and one showing that New Agers are particularly prone to delusional beliefs). What does that mean?