There have been a few studies looking at whether religious people are more co-operative in games like the ‘prisoners’ dilemma’. This is a game where you have to decide whether to co-operate or default; if both players co-operate, you do well, but if you co-operate and the other defaults, you lose out. 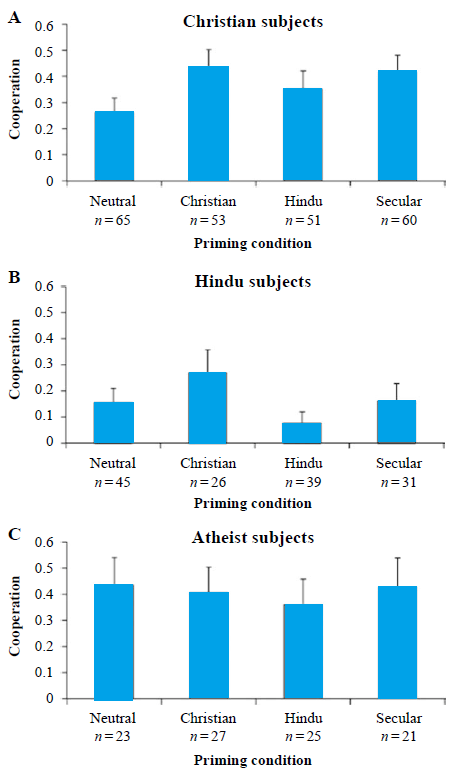 Often, these studies find that subliminal religious prompts (priming) can induce people to co-operate, although whether they are more effective than secular prompts about good behaviour is open to debate.

David Rand (Harvard University, USA) and colleagues wanted to know whether explicit priming working the same way. Explicit priming – meaning that their subjects read a religious text and then played the game – is known to work in a different way to subliminal priming. What’s more, explicit priming lets you look at texts from different religions, to see if the detail of what they are saying is important.

So in a couple of studies they asked their subjects to read a religious text and then play the prisoner’s dilemma game.

The most interesting study recruited 547 people from around the world via the Mechanical Turk online ‘micro-work’ site. They asked them to read either a Christian passage, or a Hindu passage, or a secular passage promoting charity.

What they found was that the Christian passage significantly increased co-operation among Christians, but the other passages didn’t. And none of the passages had any effect on Hindus or Atheists.

But before you read too much into this take a look at the graph. The Christians and the atheists (top and bottom graphs, respectively) seem to have high levels of co-operation across the board, regardless of how they were primed (presumably because they come from the same cultures).

The real difference seems to be that Christians co-operate less after a neutral prime, but respond to pretty much any kind of ‘pro co-operation’ priming. Atheists co-operate the same regardless of priming.

This is the problem with a study that tries to cover so much ground – especially with relatively few subjects. There are just so many different comparisons you can make, that you are bound to find something that hits the magic ‘statistical significance’ mark. So it can be hard to make firm conclusions.

On the other hand, I really like this study because it is cross-cultural. And, even more importantly, it looks at secular primes as well as religious ones – which is the only way we can find out whether religion has some specific effect, or whether any cultural reference to ‘good behaviour’ will do.

Oh, and it’s good to be back after my rather long break!