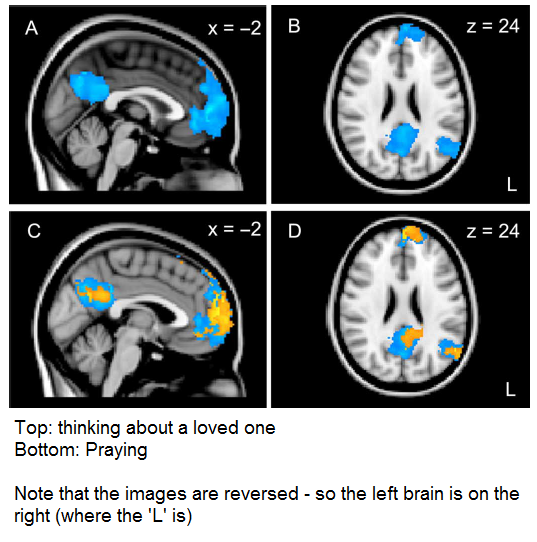 Just listen to a devout individual engaged in personal prayer, and it’s immediately obvious that it sounds like someone engaging in a one-way conversation with a close confidant. But what’s really going on inside the heads of these people when they pray>

To find out, Raymond L. Neubauer, at the university of Texas in the USA, recruited eight women and six men from the Pentacostal-style “renewalist” Christian movement. Neubauer selected his subjects from a wider pool, picking out those who were able to feel the presence of God within 90 seconds of starting to pray, and also those who used visual imagery during prayer – either through imagining Jesus or through an imaginative sense of God’s presence during some part of silent prayer

Neubauer found that there was a remarkably close match between the brain areas activated when praying and when visualising talking to a loved one (you can see the results in the graphic).

The brain areas that lit up are those linked to the so-called “Theory of Mind” – or mentalizing – and involved thinking about the intentions, beliefs, and desires of others.

This fits well with an earlier study in Danish Christians that found differences in brain activation between praying and reciting a nursery rhyme. The authors of that study suggested at the time that the the pattern of brain activation during prayer looked rather like the activation related to talking to a close friend.

This study is that first time that has been confirmed. There was somewhat less activation in the ‘scene-constructing’ areas of the brain during prayer, suggesting that the subjects did not have as strong mental image of god as they did of their loved ones. despite that, the overall pattern of activation shows that they think of god as a real entity with whom they can have a conversation.

This matches with what the subjects actually reported feeling. According to Neubauer,

…participants feel that God is actually responding to their prayer, and all reported feeling the presence of God for at least part of the time while praying inside the scanner. For these individuals, the creator and sustainer of the universe is responding to their petitions. This understanding, coupled with activation in what appears to be a central area of the self, may be what makes the experience feel highly significant.

It may also explain why people who are less skilled at mentalizing or are autistic are less likely to believe in God .