Do migraines cause religion?

Do migraines cause religion? March 6, 2014 Epiphenom 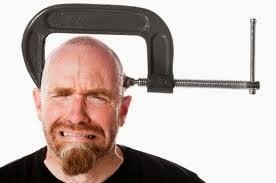 Stop sniggering there at the back. I’m serious!

This is a study on nearly 25,000 Norwegians conducted over 10 years (the Nord-Trøndelag Health Survey (HUNT)). The purpose of HUNT is to track changes in health in the whole population over several decades – and one of the things they measured in the latest survey round (HUNT 3, conducted 2006-2008) was religious attendance.

After controlling for other factors related to headache (age, gender, educational level and chronic musculoskeletal complaints), they found that those who had headaches in 1995 were more likely to be frequent attenders at religious services in 2006 (by frequent religious attenders, they mean in the Norwegian sense – i.e. at least once a month!).

Now, this was entirely down to migraines (rather than regular headaches), and the effect was quite large. Those who had migraines more than 7 days a month were 50% more likely to be frequent religious service attenders 10 years later than those who were migraine free.

What was really interesting was that there was no relationship to current headache levels. So it’s headache in the past, rather than current headache, that’s associated with current religious service attendance.

And it was something particular about religion, too. There was no relationship with visiting concerts, cinema and/or theatre.

Now, they didn’t measure religious service attendance in the earlier surveys. So there’s a little bit of ambiguity here. But on the whole, it’s pretty good data and it fits with some theoretical expectations.

The study’s authors point out that other research has found that patients with chronic pain often report that they turn to religion.

Indeed, in the HUNT study itself they have previously found that regular churchgoers had lower blood pressure. And one of the symptoms of raised blood pressure is… you guessed it – headache!

I’m not entirely convinced, however. In particular, why does current headache not link to religious service attendance?

I’d like to see how headache changed among individuals between 1995 and 2006. Some people stopped having headaches – was that linked to frequent religious service attendance?

If not, then why would people with headaches turn to religion?