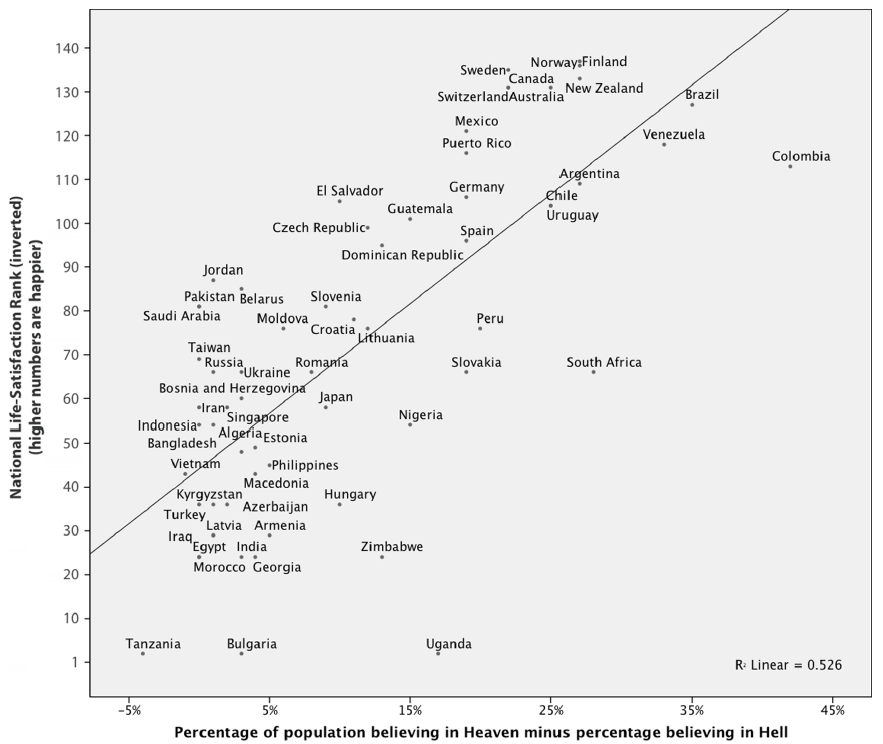 Believing in hell seems to make people unhappy. That’s the conclusion that Azim Shariff (University of Oregon, USA) and Lara Aknin (Simon Fraser University, Canada) have come to as a result of a series of studies. Now, that’s actually more surprising than you might at first imagine, so it’s worth checking out just what they did.

First off was a correlation among nations. They looked at how many people in each country believed in heaven, and subtracted from that the numbers that believed in hell – giving a number that perhaps reflects the ‘heaven surplus’. They found that countries with a high heaven surplus tended also to have a happier population.

Next they looked within the same database, but at individuals. They found that people who believed in hell tended to be less satisfied with their lives and tended to experience ‘well being’ less often. Belief in heaven had an equal and opposite effect.

You can probably think of quite a few alternative explanations for those correlations. So what they did next was a priming study.

They asked 422 American adults to write about hell, or heaven, or what they did yesterday. Then they asked about how happy they were feeling (ignoring the responses from those who guessed the underlying purpose of the study).

What they found was that “Participants who wrote about Hell reported significantly less happiness and more sadness than those who wrote about Heaven, or those in the neutral writing condition.” In fact, the interesting finding was that writing about heaven had no effect on happiness – all the differences were purely down to hell making people sad.

Atheists were also susceptible to the effect – writing about hell made them feel sad, too.

Now, Shariff and Aknin are quick to acknowledge that this study isn’t definitive. The first two studies were correlational (and in fact the first really looked at heaven beliefs, not hell beliefs), so you can’t rule out the possibility that sad people choose to believe in hell.

What’s more, there are enormous cultural differences in what is understood by the term ‘heaven’. Traditional Chinese religions don’t have the dualistic concepts familiar to us in the west.

And their priming study was done in the USA, so may not apply directly to other countries. And the magnitude of the effect was not huge.

Still, it’s hard to escape their conclusion that “Nevertheless, our finding that certain religious beliefs are consistently related to lower levels of well-being adds nuance to the general finding that religion is tied to greater well-being.”

That leads to the question: “why?”

They suggest that there is a trade off between the effect of hell belief on the individual, and the effect on societies. The individual takes on a hell belief that makes them unhappy, but makes society better (through inhibiting bad behaviour) and so provides a payoff in the long run.

There are holes that could be picked in this idea. The obvious one is that free-riders could feign belief in hell and so get the benefits without the costs. If the costs of hell belief were meaningful, in time everyone would be a free-rider (of course, it could be that the sadness induced by hell beliefs doesn’t have any meaningful effects on fitness, from an evolutionary perspective – evolution doesn’t care if you’re sad!).

Nevertheless, Shariff and Aknin reckon that this might explain why hell beliefs are on the wane. In the past people believed in hell in order to keep society safe. But, with the establishment of rule-following, well policed and governed nations, the need for hell ebbed away – so people dropped their sadness-inducing beliefs.

You could debate whether belief in hell actually reduces criminality – though Sharif has previously provided evidence that it does. Arguably, all that’s important for to maintain belief in hell is that people believe that it has this effect. So perhaps people give up on hell because they stop believing that it has any effect on behaviour.

And you need to consider other research that belief in hell is linked to fearfulness in general, and not to real, objective threats.

But it would help to explain what seems to be a real social phenomenon. The social function of religion is changing.