Almost all cultures have some kind of supernatural beliefs. But it may surprise you to know that belief in moralising supernatural beings, who care about whether mortals do good or bad, are far from universal.

That’s fascinating, and it begs the question: “why?”. Why do some cultures bother to believe spirits who watch over us and punish the bad? A popular theory holds that these spiritual beliefs help to stop cheating and deception – but then why aren’t they universal?

Carlos Boteroa, at the Southeast Climate Science Center in the USA, and colleagues wanted to know if living in hard climates plays a role.

They started with a database of 585 human societies, and divided them into those that believe in moralizing ‘high gods’ (blue dots on the map) and those that do not (red dots).

They then mapped them against the local climatic conditions, which they boiled down into two variables: the abundance of natural resources (plants, animals, rainfall, etc), and the climatic variability – whether rainfall and temperature were fairly constant from year to year.

They also took into account whether they practised agriculture and animal husbandry, and whether they were complex or simple societies (as measured by how hierarchical they were. The former is important because previous research has shown that agriculturalist and pastoral societies, as well as complex societies, are more likely to believe in moralising gods.

Crunching the numbers, most importantly taking into account that neighbouring cultures are likely to influence each other, they found that all the factors they looked  at were significant.

Importantly, societies that were low in resources and subject to unpredictable climates were more likely to believe in moralising gods.

…when environmental conditions are already as harsh as they can be, climatic changes imply that conditions may actually improve (i.e., environmental changes could bring about a sudden influx of rain or an unexpected period of milder temperatures).

Now, this is a lovely piece of work, based on a big dataset and backed up with some sophisticated analysis. And best of all, it seems to corroborate what seems like an obvious truth – and has been picked up by lots of news outlets as a result.

So let me see if I can pour a little water on the idea!

Firstly, what we have here is a correlation. If you look at the map, you can see that the overwhelming majority of moralising beliefs are clustered around the Middle East – representing the enormous influence of the Abrahamic faiths.

Although it’s not a coincidence that all three Abrahamic faiths originated within a few kilometres of each other, the climate of the region is nothing to do with it. It’s to do with being at the confluence of three continents.

They tried to strip out the effects of cultural transmission, but were they successful? We can’t really be sure, but I’d like to see the analysis done just on North and South America, just to check

And there are other factors related to climate that are hypothesised to affect religious beliefs. Parasite burden, for example (Fincher & Thornhill, 2012). A high parasite burden is proposed to make societies suspicious of outsiders, and change their religious beliefs accordingly. And parasites are more common in… lush, resource rich environments!

Also problematic is that it doesn’t seem at all clear that amoral gods are an impediment to social cohesion. As Nicholas Baumard and Patrice Boyer have argued:

… the most successful ancient empires all had strikingly non-moral high gods. This is the case for Sumer, as well as
for the Greek, Roman, Aztec, and Inca empires and the Mayan kingdoms. Roman history in particular would seem to suggest exactly the opposite of the proposed scenario.

Perhaps that’s because amoral gods can also have a moralising effect, as Benjamin Purzycki has argued.

If that’s not enough, I’d also like to challenge the basic premise that environmental stress is connected with belief in moralising gods. I have no problem with asserting that stressful conditions lead to belief in powerful gods who can tweak the odds in your favour if you perform the right ceremonies – or simply believe. It’s a recurrent theme of this blog.

But moralising gods? Maybe they are important if you need to do transactions with other people (although I have my doubts about that too), but to deal with floods and droughts? I’m not so sure.

So, have I convinced you to take this remarkable new study with just a pinch of salt? 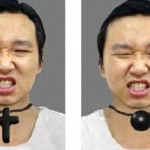 November 7, 2014
It hurts! Atheists and Christians don't feel each others pain, but with a twist.
Next Post 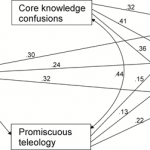 Nonreligious
America is finally losing its religion - and...
Epiphenom
TRENDING AT PATHEOS Nonreligious