Is belief in moral progress a substitute for religion?

There’s a well studied phenomenon called Terror Management Theory which basically says that, when people are reminded of their own death, their beliefs change in certain predictable ways.  People cling more strongly to beliefs that make the future seem more controllable and comfortable – and that includes turning to religion (see: Religion, Patriotism and Death).

Bastiaan Rutjens (University of Amsterdam) has previously found that reminding people of death reinforces their belief in progress. What he wanted to find out was whether this holds for both religious and non-religious people.

So he and his colleagues ran an online survey on 276 people chosen to be representative of the Dutch population. Half were asked to write about what will happen to them when they die. The others were asked about dental pain – that’s a standard control used in these kinds of studies, designed to evoke a strong emotional response.

The nonreligious were more likely than the religious to believe in technological progress.

Perhaps surprisingly, the nonreligious, Catholics and Protestants all had similar levels of belief in moral progress – although people who believed in mankind’s inherent sinfulness (mostly Protestants, in this sample) were likely to believe that morality will actually decline in the future. 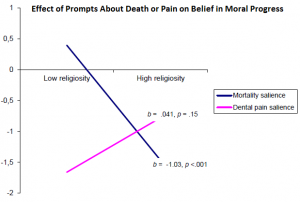 So what happens when you remind people about death? Well, it has no effect on belief in technological progress.

But reminding the nonreligious about death significantly increased their belief in moral progress.

Prompts about dental pain had the same effect on both groups.

What this shows, Rutjens suggests, is that belief in progress can offer the nonreligious a buffer to existential threat similar to that offered by religious beliefs. But belief in progress in general is not enough – it has to be a belief that the essence of humanity will get better.

And what Rutjens and colleagues conclude from this is worth quoting in full:

From this perspective, the secularization of most western countries might in itself not lead to a better world6, but when people are motivated to search for existential meaning it at least triggers a motivated tendency to believe in a better world. Perhaps those adhering to or promoting a politics of progress can benefit from this idea, by providing people with the tools to find meaning in building a better future and seeking moral and societal progress. 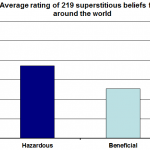 February 9, 2015
Most supernatural beliefs are about avoiding harm, not bringing benefit
Next Post 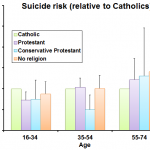 March 4, 2015 Suicide in Northern Ireland is not linked to religious affiliation
Recent Comments
0 | Leave a Comment
Browse Our Archives
Related posts from Epiphenom