When people are reminded about death, they get defensive. In the West, at least, they will tend to get more patriotic and more supportive of their cultural norms (Asian cultures tend to react a little differently). They also tend to get more religious.

Half of them were also asked to described how they felt about the thought of their death – the other half were asked to think about dental pain. Afterwards, they were asked a series of questions about how American they felt: 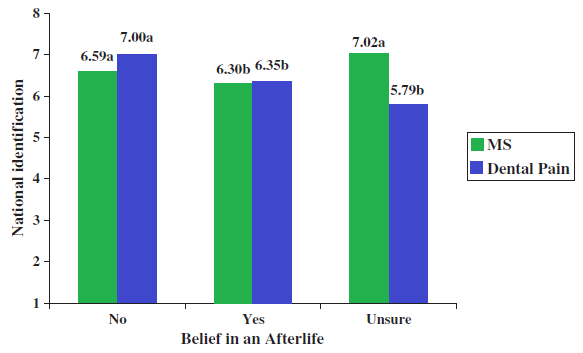 So it’s a little bit complicated, but the graphic helps to explain what happened. Basically, those who were made to feel certain about the afterlife – either that there was one, or that there was not – felt just as patriotic whether they were asked to think about their death or about toothache.

But those who were made to feel uncertain about the afterlife actually became more patriotic if they were also reminded of death.

This is a challenge to conventional ideas about why people become more religious when they think of death. According to Hohman and Hogg, what’s happening here is that it isn’t the fear of ceasing to exist that freaks people out, but rather the uncertainty over when it will happen and what happens afterwards.

They respond to those feeling of uncertainty by trying to crystallise their own notions of who they are – by identifying more stongly with ethnic, cultural, or religious groups, for example.

All this is fascinating because it once again highlights that non-believers and believers are similar in many ways (see The Happiness Smile), and that the people with the greatest emotional problems are the in-betweeners.

June 7, 2011
Religion as a tool for social control
Next Post

June 16, 2011 Safety in numbers
Recent Comments
2 Comments | Leave a Comment
Browse Our Archives
get the latest from
Nonreligious
Sign up for our newsletter
POPULAR AT PATHEOS Nonreligious
1