Religion as a tool for social control

Religion as a tool for social control June 7, 2011 Epiphenom

According to a new study just published in Science, societies can be spread along a spectrum of how tight their social control is:

… tight nations are more likely to have autocratic governing systems that suppress dissent, to have media institutions (broadcast, paper, Internet) with restricted content and more laws and controls, and to have criminal justice systems with higher monitoring, more severe punishment (e.g., the death penalty), and greater deterrence and control of crime.

A team lead by psychologist Michele Gelfand (University of Maryland) surveyed people from 30 countries to assess how tight each country was. They were asked to rate statements like:

They also (you won’t be surprised to hear if you read this blog regularly), are more religious, with more people attending religious services and (to a lesser extent) more people rating god as being important in their lives. 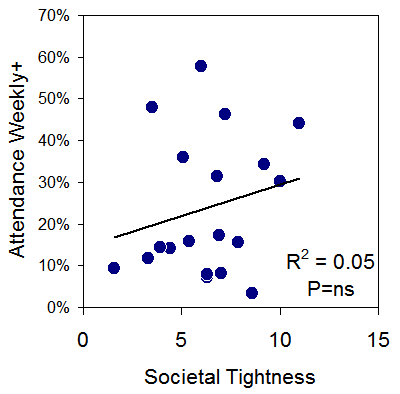 At least, that’s what they found using religion survey data from 1995. I repeated it but using data from 2005 – and as you can see from the figure there’s no correlation at all. Now, part of that might be because I only had data for half the countries. But it may indicate that the relationship is unstable.

Still, it’s an interesting finding (assuming it’s correct!). The authors argue that tight nations are religious because religion reinforces “adherence to moral conventions and rules that can facilitate social order and coordination”.

That certainly gives an alternative perspective to the conventional rubric that people under threat turn to religion to help to alleviate their anxiety!