In the face of discrimination, non-believers commit more strongly to their atheism 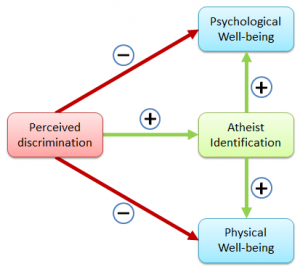 It’s widely recognised that atheists are one of the most marginalised groups in the USA. As you might imagine, this can cause all sorts of problems for non-believers.

But might it also help explain why the public face of atheism in the USA is so stridently vocal? Many American atheists are passionate about their identity as non-believers in a way that you don’t really see in more secular parts of the world – you just have to check out the atheist subreddit to see that in action.

Michael Doane and Marta Elliott, of the University of Nevada, ran an online survey of nearly 1,000 self-identified atheists in the USA to see if identifying more strongly as an atheist actually helped nonbelievers to cope with the effects of discrimination.

The survey asked about whether they experienced discrimination as a result of their atheism – either personally (e.g. “I have felt isolated because I am an atheist”) or in general (e.g. “Religious people have more opportunities than do atheists in my country”). They also asked their respondents hoew strongly they identified as an atheist, and about their psychological and physical well-being.

Throwing all the survey results into a mathematical model gave a best fit that’s shown in the graphic.

Basically, what they found was atheists who feel discriminated against have worse mental and physical health. But, they also tended to identify more strongly as atheists – and that atheist identification was protective.

Now, the authors are quick to point out that these are correlations, and so they can’t prove cause and effect. In particular, maybe those who identify more strongly as atheists are more likely to see and feel discrimination. That’s certainly been shown with other kinds of discrimination, such as racial discrimination.

However, they point out that previous research has shown that manipulating feelings of threat increased atheists own positive feelings towards other atheists. And that fits with research among other groups, including the religious.

The other thing to remember that this was a group of people who were pretty strongly identify was atheists in the first place – mostly members of atheist organisations. It’s possible that, outside of such organisational support, atheist identification does little to offset the negative effects of discrimination.

April 14, 2015
Countries free of religion are the most socially advanced, data show
Next Post 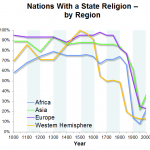