Ask students about religion, and they’ll tell you they drink less

Religious people tend to drink less than non-religious people. We know that because, well because when you ask them, that’s what they tell you.

But here’s the thing. We know that what people tell interviewers can vary with the circumstances that they find themselves in. Indeed, it can vary quite a lot from reality.

People don’t exactly lie. It’s just that how they remember what they do is influenced by their own self image. If they see themselves as a non-drinker, then they might excuse those few binges as isolated episodes.

Compounding that is the fact that people tend to tell interviewers what they think they want to hear – if they’ve told the interviewer that they are dutiful Christians, they would appear hypocritical if they then admitted to drinking. And no one wants to be seen as a hypocrite.

Lindsey Rodriguez and colleagues at the University of Houston in Texas wanted to know whether you get different answers about drinking behaviour if you ask people about their religion first.

The experiment was quite simple. They asked 300 students (average age 22) about their drinking habits and also about the strength of their religious beliefs and the frequency of their prayer and church attendance. Most (67%) were Christian, but 10% were Islamic and 6% agnostic.

For good measure, they also asked them how important it was to them to be seen to be acting in the socially correct way. They did that to check the students’ tendency to tell interviewers what they want to hear – something that’s called ‘socially desirable responding’. 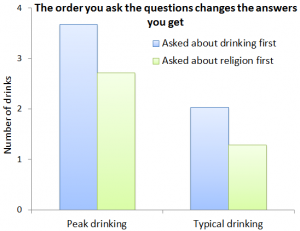 Overall, they found that, as expected, religious beliefs and behaviours were negatively correlated with reported drinking behaviour. The correlation was a little weaker if they asked about religion first rather than drinking.

When they checked the statistics, what they found that when they asked about religion first, the students reported drinking significantly less. As you can see in the graphic, they reduced claimed to have 1 fewer drink in their peak drinking sessions, and about half a drink less in a typical session.

The authors suggest that what’s happening here is a combination of cognitive dissonance (the idea that, when faced with conflicting information about themselves, people try to deal with it by minimising some aspect of their own behaviour), and something called ‘concept activation’. That’s the theory that reminding people about religion encourages them to report behaviours consistent with religious ideals.

What this suggests is that, among these students at least, ‘religion’ may seen stereotypically as representing set of moral beliefs about not drinking. Reminding people about religion then encourages them to report behaviour that’s more in line with that stereotype – regardless of how religious they actually are.

Now, one conclusion you cannot take from this research is that religious people are hypocrites who drink as much as the non-religious. For a start, remember that the effect was just as strong in the less religious as it was in the more religious.

But it does show why you need to be cautious about surveys on religion and behaviour. Psychologists are well aware of these effects, so they usually ask about religion last. But sometimes it’s simply not possible to disentangle these effects.

Which is why it’s always better to study what people actually do, rather than what they tell you they do!

July 8, 2015
Surprisingly, belief that God is in control increases support for government welfare programmes
Next Post

July 22, 2015 Does more education mean more, or less, religion? It depends whether you take intelligence into account.
Recent Comments
0 | Leave a Comment
Browse Our Archives
Related posts from Epiphenom