Does more education mean more, or less, religion? It depends whether you take intelligence into account.

July 22, 2015 by Epiphenom
0 Comments
Does more education mean more, or less, religion? It depends whether you take intelligence into account. July 22, 2015 Epiphenom

It’s pretty well established now that there is a statistical connection between intelligence and non-belief. The effect is small, but it’s consistent and has been shown many times.

Education, however, is a different matter. Some studies show that educated people are more religious, while others find they are less religious. Now there’s an obvious problem here because educated people also tend to be more intelligent – so it’s not clear what’s driving what.

To illustrate this, take a look at a new analysis by Yoav Ganzach (Tel Aviv University) and Chemi Gotlibovski (The Academic College, Tel Aviv). They looked at data from 8984 Americans surveyed in the National Longitudinal Survey of Youth (the survey subjects were 13-17 years old at the time of the survey, in 1997).

It got more interesting when they started putting other factors into their model.

When they controlled for factors of race, wealth, parental education, sex and personality, education is no longer an important factor. Intelligence, on the other hand, still matters.

In fact, after controlling for other factors, there was a suggestion in the statistics that educated young people actually tended to be more religious! So they played about with the model a bit.

If you ignore race, sex and personality, then better-educated young people are more religious (although intelligence is still linked to lower religiosity, and is still a much stronger factor than education).

If you take intelligence and parental education out, but leave sex, race and personality in, then education is once more linked to lower beliefs.

The authors make two key points out of all this.

The first is that intelligence is an important factor in explaining differences in religious beliefs. It should be noted that the link between intelligence and non-belief in their study, as in previous studies, is quite weak. In fact, even with all factors combined they could only explain about 25% of the variation between individuals in belief.

But the relationship is actually more complicated than that because religion is not a fixed thing that’s the same for all people, regardless of their intelligence or education.

A classic study a few years back found that education is only linked to disbelief in countries with moderate average IQ (See: Does education mean more or less religion?). In wealthy countries (where, due to better diet and environment, IQ tends to average higher), education is not linked to religion.

But the authors concluded that this was because religion in these countries is transformed. It’s no longer the dogmatic, superstitious religion of tradition but something more, well, vague and ethereal. Something better suited to the sensibilities of intelligent, educated people. Something less disprovable.

In other words, more education may not mean less religion. But it may mean a different kind of religion. 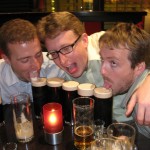 July 15, 2015
Ask students about religion, and they'll tell you they drink less
Next Post

July 29, 2015 In a just world, how you act depends on who you think delivers justice
Recent Comments
0 | Leave a Comment
Browse Our Archives
Related posts from Epiphenom