That was weird – are you a mind reader? Thinking style affects how we interpret weird experiences.

July 1, 2015 by Epiphenom
0 Comments
That was weird – are you a mind reader? Thinking style affects how we interpret weird experiences. July 1, 2015 Epiphenom

Psychologists have identified that all of us have two kinds of thinking styles. There’s the slow, deep thinking style where you ponder things for a while before making a decision. And then there’s gut instinct – where you make a decision based on intuition.

Some people tend to prefer one kind of thinking style over the other, and that can have important implications for the conclusions we make about the world around us.

For example, research in Australia has shown that Hare Krishna devotees are more inclined to use intuitive, rather than deep thinking when it comes to problem solving. And other research has shown that deep thinkers are more likely to lose the religious faith they were brought up with.

What Romain Bouvet, at the University of Tolouse in France, and his colleague Jean-François Bonnefon, wanted to know was whether intuitive thinking styles also make people more susceptible to attribute supernatural explanations to weird or unusual events.

So, for example. They ran a version of the classic mind-reading experiment in which the first person looks at a card from the Zener set (i.e., cards displaying one of five symbols: square, circle, cross, star, or wave), and the test subject has to try to guess which one it is by reading their mind.

Except in this case, the experiment was a set up. The person looking at the card was a genuine subject who thought it was a real mind-reading experiment. But the ‘guesser’ was a confederate of the supervising psychologist. And the supervisor signalled to the stooge what was on the card using code words:

The way the experimenter started his instruction to the reader (“Well now,” “Ok,” “Well ok,” “Well,” and “Please now”) corresponded to the star, the wave, the cross, the square, and the circle, respectively.

Of course, the confederate guessed right every time (three cards in a row). Quite a remarkable coincidence!

Or was it? What the researchers found was that instinctive thinkers were more likely to explain this as actually being evidence of ESP, rather than just luck.

Then they gave some other students what they were told was their personalised horoscope, although in fact everyone got the same generic blurb (stuff like “You have a great need for other people to like and admire you. You have a tendency to be critical of yourself”, etc.).

Once again the instinctive thinkers were more likely than deep thinkers to think that these generic horoscopes accurately described them as individuals.

Now, the authors are at pains to point out that these experiments say nothing about religious believers – since religious belief involves a lot more than simply belief in the supernatural.

But what these studies do show is that is that people who are inclined to ponder things more deeply are less inclined to wrongly attribute unusual events. And that fits with other research which found that believers in the paranormal are generally confused about how the world works – perhaps because they never really stop to think about it! 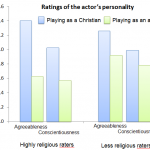 June 25, 2015
Distrust of atheists is widespread and pervasive: more evidence
Next Post