Distrust of atheists is widespread and pervasive: more evidence

A new opinion poll has some bad news for atheists. Some 40% of the US population would not consider voting for an atheist presidential candidate, regardless of their policies. That’s fewer than would vote for a gay or lesbian – or even (gasp!) a Muslim! It’s pretty much in accordance with a previous poll which showed that atheism is a bigger no-no for presidential candidates than homosexuality, extra-marital affairs, or drug use.

Why do people hate atheists so much? One recent study found that atheists terrify believers, because they remind them of their own mortality. It’s an idea that got a lot of airtime among atheists, but unfortunately for them it’s certainly not the whole story, and probably not even the most important factor. Let me tell you the story.

When Luke Galen and colleagues from Grand Valley State University in Michigan asked undergraduates to evaluate videos of regular college kids describing formative experiences, the results they got were quite surprising.

The undergraduates didn’t much like the student who described herself as an atheist, rating her as significantly less agreeable and conscientious than the devout Christian. But that’s not the surprising bit.

The surprise is that the college kids in the videos were actually actors, reading from a script. The scripts were virtually identical, except the script for the atheist role mentioned that the student was an atheists and that the volunteer activity was with a secular group. whereas the script for the Christian said that they were a Christian and that the voluntary activity was through a Church group (it was the same volunteer activity in both cases). And, for good measure, the actors swapped roles for half the viewings (i.e. both Actor 1 and Actor 2 recorded the atheist script and the Christian script).

So these little video shorts were of people identical in every way, except that one was supposed to be an atheist and the other a Christian. This graphic shows the results 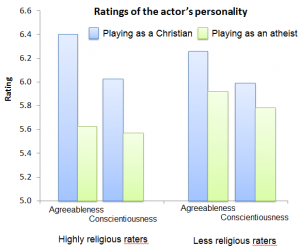 The first thing to notice is that the highly religious raters (the bars on the left) rated religious people to be considerably higher in two key facets of personality – agreeableness and conscientiousness.

OK, maybe that’s not too surprising. But what is remarkable is the less religious raters (which includes the entirely non-religious). They were just about as positive about the Christian, but only somewhat warmer towards the atheist.

In other words, even the less and non-religious were biased against atheists.

They found that this effect was independent of how much the raters liked or disliked atheists as a group, leading them to conclude that:

These findings provide strong evidence showing that the religious bias in the attribution of personality characteristics is occurring via people’s perceptions of morality independently of their impression of the target’s broader religious group.

Now one interpretation of this is that, sure, the raters are projecting their own beliefs about atheists. But maybe they’re on to something, because when you ask people to rate their own personalities you find that, at least in the USA, atheists actually rate themselves as being disagreeable and unconscientious (See: Why are American atheists disagreeable and unconscientious?).

One school of thought says that this is just an American thing. After all, it takes a pretty unusual kind of individual to be openly atheist in the USA – given that there is so much anti-atheist prejudice.

That’s probably why the personality self-ratings of atheists in Europe are quite different from those in the USA. In Europe, you don’t have to be a black sheep to be an atheist.

So let’s talk about trust. 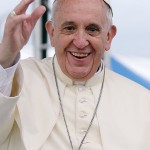 Nonreligious
The decline of religion in Europe did not...
Epiphenom
TRENDING AT PATHEOS Nonreligious