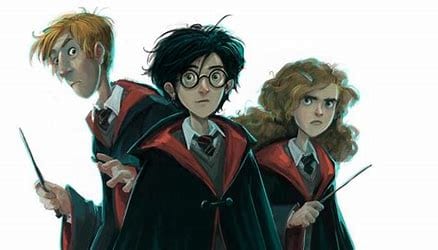 Harried a bit by the evil in the world?  Make peace with Potter and his friends.  Fr. Dan Rehill, priest at St. Edward Catholic High School in Nashville should have thought of that before announcing the school was banning the Harry Potter books.  Apparently, after checking with some exorcists, Rehill believes that the books contain real curses that could spiritually damage young readers.

O my gosh.  I thought we had gotten over this decades ago when the books first came out. Do the books contain spells and incantations and discussion of magic so that the reading of the novels will turn our young to the Dark Side?  No, nada, never, nicht!

Don’t Set The Catholic Faith Up For Ridicule

The priest and the school have only succeeded in setting themselves up for ridicule and presenting their state as populated by backward, superstitious southern folks.  The Catholic faith deserves better and so do all Tennesseans. The Catholic Church has no official position on the Harry Potter novels.  Gee, I wonder why?

Years ago, I helped host a convocation on the rise of Satanism at a well-known secular university.  It was a very popular and informative seminar, treated with respect by religious and secular officials.  There, we dealt with the things that go bump in the night that are a real threat to young people.  To take an innocuous series of childrens’ tales and turn them into the Grimoire Munich Manual of Necromancy (a 15th century tome of awful spells not to be confused with the fictional Necronomicon by Lovecraft) or the Malleus Malefacarum (a medieval inquisitional book about witchcraft that is dangerous) is just stupid.  The Ouija Board Game is far worse in that one has to invite an entity into oneself to propel the little triangle that spells out answers.  But Harry Potter evil?  Not a chance!

Why The Potter Novels Are Not Demonic

There are problems with Potter.  But the novels’ very problems help show how facile the accusations against it are.  Here’s why:

First,  the spells invoke no deity.  They are just words, sometimes in Latin.  They have about as much effect as if a child said, “Abracadabra.”  There is no force of magic–black, white, neutral or otherwise behind them.

Second, a major problem of the novels is that they are so Christian light.  They have a veneer of Christianity in the fact that the morals described are conventional, western Christian morals.  In other words, all show, but no real substance.

Third and following that statement, the worst defect is that there is no substantive rationale for the good or evil present in the novels.  Harry is the hero, so he is the good guy and does good things.  So do his friends.  What makes them good?  As far as I know, Christ or God the Father is never mentioned.  Christmas is celebrated every year at Hogwarts without reference to Jesus.   Voldemort is the bad guy, and whatever he does is evil, because J. K. Rowling, the author, says so.  We don’t really know where Voldemort gets his evil from. What’s his history?  Why is he bad?  What makes him different than the good kids?  That’s where the author’s conventional Christianity breaks down.  She doesn’t root goodness in the One God; nor does she root evil in the rebellion of some Satanic figure.  Evil and good in her novels just are.  Perhaps that is why St. Edward School draws the conclusion that the books are anti-Christian.  I call the omissions mentioned above sloppy writing, vacuous modern morality, and representative of poor world building in a fantasy novel.  Rowling doesn’t give us enough foundation to make her fantasy world believable.  That’s just bad story-telling, not malice. One cannot equate bad writing with pernicious evil.

Four, that’s what makes her books only relatively entertaining and not classics.  A classic fairytale educates children on the nature of good and evil.  Rowling does neither.  She simply tells what young people often find to be an exciting adventure story, but that is as deep as it goes.

Five, the novels are so shallow in the philosophical area of good and evil that I am surprised any exorcist would be worried about them.  There have been no reports of Satanists being inspired by these books, or young people converting to the practice of evil.

Worry About The Evil That Really Tempts The Young

We priests, parents and religious educators waste our breath condemning peripherals when so much real evil that can corrupt our youth is slamming them in the face every day:  abortion, euthanasia, unbridled greed, amassing of power, slavery, racism–the list goes on.  Satan and the realm of evil have far greater tools to use against the young than a rather harmless series of novels.

By the way, I like so many other priests, asked our parishioners last Sunday to pray for people in the United States worried about Hurricane Dorian that they might be delivered of its power.  So far the storm has not pummeled the United States.  Coincidence?  I don’t think so.  The storm has caused much damage elsewhere but it could have been so much worse.  Maybe I’m the one that’s truly naive, but I don’t think so.  I’ve always found the power of prayer to be stronger than any magic.  Plus, I never needed a wand.

September 18, 2019 BLESS ME FICUS FOR I HAVE SINNED
Recent Comments
6 Comments | Leave a Comment
Browse Our Archives
get the latest updates from
Thin Places
and the Patheos
Catholic
Channel
POPULAR AT PATHEOS Catholic
1

Abuse, the Rosary, and an Old-Fashioned...
Steel Magnificat
Related posts from Thin Places