A Cloud of Witnesses

A friend and I were talking about conversations she’d been having lately, and she wondered how or whether she should “defend the Church.” I said, “Don’t defend it!” (I should have said, “Don’t defend Her,” but I would feel badly about that.) This is not a time when we can really “defend” our Church. What we can do, I think, is confess our own faith. And we may be able to speak, to some extent, about what our Church is.

This is what Ross Douthat was doing in a twitter thread which noted, among other things,

One of the striking things about the Hebrew Bible is that it’s the record of a people that makes extraordinary claims for itself — that their tribal god is the Only God, that they are His chosen people, that all nations will eventually worship him, etc.

And they buttress those claims with an extensive history in which they are … terrible. Morally terrible, politically impotent, constantly apostasizing, ignoring their prophets, the works.

Basically the Hebrew Bible says: “Hi, we’re the true chosen people of God, and to prove it let us tell a long series of stories about how our patriarchs were sinners, our kings were even worse, and we failed God completely time and time again.”

The *best* king of Israel, the awesome all-conquering one, is a philanderer and murderer. The second-best one, the temple-builder, becomes an idol-worshiper. And about the rest, the less said the better.

Pace certain evangelicals-for-Trump and certain RC churchmen, this is not an argument for tolerating ugliness in service of some higher good. God and His prophet deal very harshly w/David when he kills Uriah, and the attitude of the prophets throughout is horror at Israel’s sins.

But for all their horror the prophets never doubt that Israel *is* the elect, the chosen people, God’s intended bride. And if the Old Testament is supposed to be a revelation with big implications for the new covenant, for the Christian church, that part is important.

He notes that this is not necessarily a persuasive claim to those whose faith is shaken or shattered by clerical abuse and cover-ups. But it’s not an aspect of the Bride of Christ which I’d considered before. It made me wonder about something. Ross mentions two roles here, king and prophet. But what about the victims of the powerful? Where do they appear, except as occasions for the prophets’ fury?

The Hebrew Bible does name some women abused or treated as objects: Dinah, Tamar. In the New Testament, both Bathsheba (whose consent is, let’s say, pretty heavily overshadowed by David’s power) and her murdered husband appear in Jesus’ genealogy, since Matthew makes sure to tell us that Solomon’s “mother had been the wife of Uriah.” Matthew rarely identifies the mothers in his genealogy, so the insistence on Jesus’ descent from Bathsheba may be a sign that God Himself did not wish David’s sins–and his victims–to be forgotten.

Some of the most powerful writing on Catholic spirituality after abuse has come from women who have sought out saints who experienced abuse. Dawn Eden Goldstein’s book My Peace I Give You: Healing Sexual Wounds with the Help of the Saints is a compendium of reflections on such saints, from the former slave St. Josephine Bakhita to Bl. Karolina Kozka, murdered by a soldier while escaping his attempt to rape her. I don’t think My Peace discusses St. Charles Lwanga and Companions, though they too were killed not only for proclaiming the Catholic faith but because they would not give in to the sexual appetites of a powerful man. And Catherine Addington wrote a brilliant reflection on Bl. Laura Vicuña:

Laura’s home life was miserable, but she loved school, and the Salesian sisters who ran it. She dreamed of becoming one. When the sisters learned that Manuel was using the girls’ education as leverage, telling them he would take it away if they did not submit to his physical and sexual abuse, they boarded the girls for free. Laura was safe, but continued to worry for her mother, whose cohabitation with Manuel put her in physical and spiritual danger. After her First Communion and Confirmation, Laura made a vow to the Sacred Heart of Jesus: my life for her conversion.

Laura contracted tuberculosis the next year. As she died, she told her mother of her vow. They say Mercedes repented immediately, and she promised her daughter that she would leave Manuel. Laura used her last breath to thank the Lord. She was twelve. Her abuser paid for her funeral.

(I think the best way to read this short, incisive piece in its entirety is to contact Catherine on twitter; it’s from her newsletter)

Catherine also wrote an essay for the anthology I edited, Christ’s Body, Christ’s Wounds: Staying Catholic When You’ve Been Hurt in the Church, in which she explored the ways in which “the saints Catherine” had been misused in her education, and how she could reshape her relationship with them. It’s one of the absolute best “spiritual essays” I’ve ever read; it was a privilege to edit it.

These pieces, like Dawn’s book, are so powerful in part because they show that abuse survivors are not alone. The things said by their abusers, or people who take the abuser’s side, are false–it is not true that nobody will believe you, that what happened to you is not a big deal, that you must not tell anyone. They say, Terrible things will happen to you if you tell. The saints say, Your wound is your witness.

The saints bear witness to what the Church really is. This is not an uncomplicated witness. St. Mary MacKillop, who was (possibly) punished for reporting accusations that a priest was sexually abusing children, is in the cloud of witnesses alongside St. John Paul II, who protected Fr. Marcial Maciel from much-needed investigation. But the saints who experienced abuse witness that God has not abandoned the abused person, that abuse is never His will, and that there is a place for abuse survivors in the Church: in our litanies, interceding for us, honored by all who turn to them in need, heard and beloved by God.

These saints are words in a song whose meaning is the life of Christ. They are members of His Body; their wounds pour forth His Blood. Jesus, stripped and humiliated, subjected to a form of torture which, like many tortures, had an element of sexual humiliation–Jesus, in His violated Body, in His suffering at the hands of religious leaders who should have been the first to hear His call, in His abandonment by the disciples who should have shepherded His flock–Jesus teaches us what our Church is by welcoming us inside, through the doors of His Wounds. 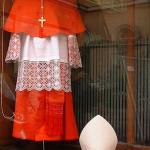 September 4, 2018 From Apocalypse to Revelation
Browse Our Archives
get the latest updates from
Eve Tushnet
and the Patheos
Catholic
Channel
POPULAR AT PATHEOS Catholic
1