I review Michelle Tea’s “Against Memoir”

Any book titled Against Memoir will inevitably be a descent into the self. Michelle Tea’s new collection of “Complaints, Confessions & Criticisms” opens with a tribute to Valerie Solanas, who wrote the violent, viciously comic feminist SCUM Manifesto and then shot Andy Warhol; it’s also a portrait of Tea’s own adolescence, centered on her discovery that her stepfather had drilled peepholes in the walls of her bedroom and bathroom. In memory she revisits the scene, spying on herself as she dances in front of her mirror and glances behind herself, wondering if she’s being spied on. “I was a girl in a horror movie,” Tea says, and you can feel the camera sneaking up on the nape of her neck. Tea writes that her stepfather “came into the family like an invasive parasite, killed it, and inhabited its dead body.”

When she escaped she gulped feminism the way she gulped liquor. It was self-medication, it was community, it was escape. Tea is one of the millions of women saved by feminism. And so it’s all the more striking that in this collection she frequently runs up against its most severe limit: its privileging of control over surrender.

November 20, 2018
"Hour of the Wolf": Further Reflections on Staying Catholic in a Time of Crisis
Next Post 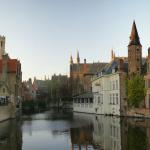 December 2, 2018 From Now On Our Troubles Will Be Miles Away... In Bruges! (and two more short movie reviews)
Browse Our Archives
Related posts from Eve Tushnet