From Now On Our Troubles Will Be Miles Away… In Bruges! (and two more short movie reviews)

When I read that pop-history book about the beguines (laywomen who lived in community, basically), I wondered whether beguines paid so much attention to Purgatory, so much that they were even credited with releasing souls to Heaven through their prayers, in part because their spirituality was so influenced by courtly love. If love is passion–if love always comes hedged around by obstacles, by walls of thorn and rings of fire–then perhaps it’s intuitive that God’s love would be experienced by the soul as pain, before the soul is transformed through that love into love itself. And so Purgatory and Heaven are simply what God’s love feels like to the rapt soul at different points on her journey to her Lover. Not two “places,” but two states of conscience, experiencing the same thing according to their different receptivity.

For years my edgy guy friends would tell me I had to watch In Bruges, it’s the greatest Christmas movie ever, how have you not seen In Bruges!!!, etc etc. I finally did and you know what? My edgy guy friends were right. In Bruges is written and directed by Martin McDonagh, whose Three Billboards in Ebbing, Missouri was a real mixed bag for me, but in this outing even the most obnoxious elements turn out to mean more than their self-consciously shocking surface. This is a movie about two hired killers hiding out in Bruges over Christmas; one of them wants to see the sights, while the other one loathes the place and curses every charming medieval street and edifying museum. And at a certain point I realized that the calm, normal tourist one (Brendan Gleeson) is reacting to the city like a normal tourist because he’s numbed himself, he hasn’t acknowledged anything about the horror of his job, whereas the miserable one (Colin Farrell! nobody’s more fun when he’s miserable) hates Bruges because his unquiet conscience makes being in the presence of beauty painful. The city’s undeniable beauty, which he absurdly, with increasingly-humiliating ferocity denies, drives him further and further into self-loathing and unresolved guilt.

ETA: In fact a lot of the movie’s humor, as in the head gangster’s rant about swans, comes from the fact that the people who most “appreciate” the beauty of Bruges are the ones who have most numbed their consciences. Meanwhile our queasy, bad hero spends most of the movie uncertain whether he’ll just reject the heavenly beauty of Bruges or let it scorch him into some new shape.

In Bruges is a more phantasmagoric and honest Grosse Pointe Blank (which I love, don’t get me wrong), more suicidal, more willing to court stupid laughs and then turn them inside-out into something sharper. So like, there’s a scene where Peter Dinklage’s character rants about race war to a couple bored prostitutes, and I thought, I would’ve loved this in college but tbh I no longer need to test boundaries just to know that I’m alive, because that’s stupid… but we revisit this scene later and it becomes a microcosmic parable about the rationalizations we use to squirm out of hating ourselves for our stupidity, and how those rationalizations only make us feel worse. Ah, it’s so good! There’s a star-crossed romance and you think the girl will be a cipher or a reward for our hero, but she turns out to be also a lowlife who feels bad about herself and maybe would like to get out of the life she’s made, and suddenly I could not be rooting harder for these two crazy kids.

This is a jittery, unhappy movie, propelled by bad energy, it’s a bad time and a great story, it throws off a lot of little dialogue-sparks which seem pointless until they pay off about an hour later, it’s got a Graham Greene but funnier and doing way too much coke kind of vibe, and why are you even here instead of starting your Advent off in Bruges?

It is, like Advent, about our need for rescue.

Okay, two much more normal movies. Ladyhawke is a 1985 fairy-tale about a boy (Matthew Broderick) who gets mixed up with two lovers separated by an evil bishop’s curse. By day, Etienne (Rutger Hauer! YES) is a man but Isabeau (Michelle Pfeiffer in her heyday) is a hawk. By night, she’s a woman but he’s a wolf. They’re unable to communicate in their animal forms; they have only a moment at dusk or dawn when they can longingly reach toward each other, but one of them always changes before they can make contact. This is like the Classic Comics version of Denis de Rougemont, I loved it.

The film is gorgeous to watch, especially since the quality of light is so central to the plot: Is it afternoon or sunset? Is it midnight, or is the horizon starting to glow blue? There’s a synth-heavy score and a guilt-ridden drunken priest; obviously I loved it. I will say the inevitable happy ending takes place right after the hero’s vengeance quest has led him to desecrate a church. It’s hard to feel soft and sighing about the impending wedding when you know the church will have to be reconsecrated first. (And the groom will be serving public penance until well after the Fourth Lateran Council, I’m just saying.)

Dark Harbor is a 1998 suspense flick and basically the definition of “better than it had to be.” It’s about an unhappy couple who encounter a mysterious drifter on the road; he insinuates himself into their island vacation as events spiral toward deadly violence. Or you could summarize it by saying it’s a fairy tale–the director’s commentary makes it crystal clear that this was always intentional, the haunting forest filled with misty rain and the girl plunging through it in her red cloak. It’s a fairy tale about a woman in danger, who, like so many girls in the woods, doesn’t know whom to trust. Or you could say it’s about my very favorite horror image: the surging sea which carries you beyond your own morality, into an abyss of action without reflection, need without future.

Or you could say it stars Alan Rickman, Polly Walker, and Norman Reedus, all of whom are stellar. Rickman is all wincing smiles and rippling cognac anger, with moments of strange sincerity even his character doesn’t seem to want or intend. Walker is wide-eyed, but not innocent; she has a core of determination, a strength which makes the trap all the more unjust as it closes over her. Reedus suggests hidden currents, twisting passages in the soul. The script is solid (the speech about marriage, and how you’ll never know what love is “until you’ve done the time,” is double-edged and unforgettable). It’s fantastic to look at. The writer/director, Adam Howard, even made practical obstacles work for him: The opening credits are set over a view of a road in the rain, which looks somehow unreal, like a memory or a story. That’s because it’s one very short clip repeated over and over, because it’s all they had after their first idea for the credits fell through. And yet it’s hypnotic.

This is a simple story, with some fun twists in both the plotting and the direction. It’s a perfect thriller for an evening in when the wind howls outside, when you curl up under a blanket, when someone you love brings you a cup of cocoa and you sip it, smiling, happy and certain you can tell what the people around you are thinking.

November 26, 2018
I review Michelle Tea's "Against Memoir"
Next Post 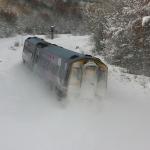 Catholic
"Have You Ever Heard of Insect Politics?": Short...
Eve Tushnet

Catholic
"Every Child a Wanted Child": I read The...
Eve Tushnet
TRENDING AT PATHEOS Catholic