I Shall Do Thee Mischief in The Anvil: I watch “Cruising”

I Shall Do Thee Mischief in The Anvil: I watch “Cruising” January 10, 2019 Eve Tushnet

Cruising, the 1980 sleaze thriller where Al Pacino goes undercover in the New York leather/s&m scene to catch a serial killer, is notorious for both smut and homophobia. The thing is, it’s fantastic. (Every day is self-parody day, I know, I know.)

All the angry critics were right. Even after William “Maybe Your Movies Need ‘The Exorcist'” Friedkin cut 40 minutes from the film in order to avoid an X rating, it’s still just a lot more explicitly sexual and violent than I expected. It has that unnerving ’70s quality where nobody seems to know where the limits are anymore, so directors don’t even seem to know when they’re crossing a line. It’s not an easy film to watch, even for sleaze connoisseuses like yours truly. And Cruising, which I first learned about via The Celluloid Closet, doesn’t escape the gravitational force of the anti-gay cliches it deploys–though I think it does try to escape them.

But first of all, there is so much talent in this film, from its very first moments with the unsettling strings by Jack Nitzsche. Al Pacino is stellar, with his giant dog-day eyes, banged-up and not as diffident as he wants you to think he is. I thought to myself, “Man, this looks a lot like Miami Vice,” and in fact the director of photography also worked on that gorgeous series; you can see it in the glinting streets, in the sulfurous colors and the grime.

This is a thriller, I guess, though it’s told like a journey of self-discovery–and filmed like a fairy tale. Are we sure Little Red Riding Hood didn’t wonder what it would feel like, to be deep inside that big bad wolf? Straight (?????) cop Steve Burns (Pacino) ventures into the underworld, and discovers there an ecstasy which might get the better of him. There’s a lot of play with clothing here, the self you can always shed; the uniform which can mean either cop or deviant. And both sides of that dichotomy are forces of chaos, misuse of the human person. The cops are dirtier than anything the handkerchief code could signal. The most phantasmagoric scene in this movie, the moment when it skids furthest into nightmare, is the interrogation scene back at the precinct. The sex clubs are not good places but people who need an escape will escape downward if no upward escape is plausible.

January 7, 2019
"Confession in America": I review a history of an individualist country
Next Post 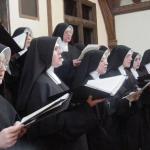 January 11, 2019 SECRET NUN MUSIC! alarm emoji nun emoji
Browse Our Archives
get the latest from
Eve Tushnet
Sign up for our newsletter
POPULAR AT PATHEOS Catholic
1

Saint Chad - The Importance of People
How much do you think the people you surround yourself with will...
view all Catholic blogs
Copyright 2008-2020, Patheos. All rights reserved.