A Social-Media Comedy from the 1970s: And Four More Quick Movie Notes

Hm, let’s do this in chronological order of the films’ release. That means we end with the weakest one but hey, I don’t make the rules. ( – a person who just made this rule’s opinion.) …I rented the first three of these on YouTube.

Bachelor Mother: A real delight–a Depression-era romantic comedy, released 1939 and deeply marked by economic fears, in which plot contrivances mean Ginger Rogers can only keep her department-store toy counter job if she agrees to raise a foundling infant. Everything about this is so well-balanced. Rogers is terrific, David Niven is perfectly satisfactory as her love interest, and since he starts out in the position of power it’s important that he is humiliated enough to make you cheer their inevitable union. The first shot of Rogers, with her head down and her shoulders bowed over the toy counter, conveys her exhaustion and unhappiness; and since misery loves absurdity, the hot toy of the season is a horrendous quacking duck thing, which haunts us throughout the film and plays a role in the climax.

Maybe the way to explain why this movie works so well is to tell you about the reaction shots. We get at least two perfect reaction shots of Rogers just laughing all over her face as her boss/suitor is defeated; and one lovely shot of him gazing raptly up at her retreating back as she heads away from him to her upstairs apartment.

The Court Jester: Ah, I got to introduce this 1956 confection to a friend, who loved it as much as I’ve loved it since I was a child. Danny Kaye is Hawkins, the pet entertainer of a band of woodsy rebels (the sort of thing Captain Cully in The Last Unicorn was parodying), who gets a chance at real action when he infiltrates the court of the usurping tyrant (some actor) and his henchman (BASIL RATHBONE!). Plots entangle, there’s witchery and poison and derring-do, the women have huge sleeves and the men sing. Everything is perfect. You owe it to yourself to watch this gem.

Rewatching it as an adult, I was of course struck by the light touch with which the romance is handled. Hawkins is in love with his commanding officer (Glynis Johns), which leads to a lot of pleasurable stuff where he addresses her as “Captain” and “sir”; and also, substantively, a beautiful short conversation where they subjunctive-tense their way through a discussion of what makes a man. Could the Captain ever love a man who is not a warrior? And the Captain says that tenderness can also make a man: “a rare man.” It’s an important truth spoken without scolding, a truly sweet moment which is not betrayed by the jester’s character arc. (He has the exact same job in the last scene that he had in his early days with the rebels.)

This movie is so good that I couldn’t find a place to tell you that Angela Lansbury is in it until right now. She’s a bratty princess and a joy.

Citizens Band: I watched this 1977 Jonathan Demme flick because of Jesse Walker’s description: “It’s my favorite movie about social media, and it came out years before Mark Zuckerberg was born.” The opening credits, a collage of clips from the film’s dialogue, give the basic idea of CB radio as a world apart, where anybody can be–or pretend to be–anything. Citizens Band is a stylish film in its gritty ’70s way, and another romantic comedy, with our hard-luck hero (Paul Le Mat as “Spider”) still chasing his hometown sweetheart (Candy Clark).

While you’re watching, it is kind of amazing to see how many aspects of the social-media chaosphere the film captures. Afterward, I was more struck by how optimistic it is. It is certainly true that online connections can lead to support and community IRL, but Citizens Band‘s finale is so utopian (…and its community so homogeneous) that even the neo-Nazi lends a helping hand. And so the movie did end up feeling as noteworthy for what it excludes or doesn’t examine as for the startlingly contemporary things it includes. Or, to put it another way, this very well-made movie convinced me that feel-good romcom is exactly the wrong genre for a social-media movie.

To Sleep with Anger: Charles Burnett (dir. the great Killer of Sheep) spins a haunting tale of a rakehell relative (Danny Glover) who comes out of the Southern past to disrupt the semipeaceful life of an extended family in late ’80s black LA. (The film came out in 1990 aka 1989b.) Superstitions and Christian moral revival coexist or clash; the family’s preexisting tensions head toward violence under the malign influence of Harry the intruder, who may even be the Devil himself. This was gripping to watch, with some very fun dialogue–like the promise, when Harry fetches out the corn liquor he brought up with him from the Southland, that “There is a fight in every bottle.” The moment when Harry says, “Oh, I’m more modern in my ways,” is the first moment we see his knife.

Harry draws out one son’s envy, his materialism, and–most intriguingly–his longing for violence. The possibility of violence lures him where the possibility of sexual pleasures didn’t quite. There’s a strong theme of childhood innocence, which you all know I do not believe in, but this is a strange film which I think would reward rewatching.

Billy Elliot: Well, I wanted to like this 2000 tale of a miner’s son in 1984 Durham who discovers a love of the ballet. There are some great strengths in Billy Elliot, some great talents on display, especially in the cinematography and the acting. You feel Durham as a town under police occupation as the miners strike; Billy’s father (Gary Lewis), a taciturn, angry and damaged man whose love for his son emerges late but strong, is a terrific character who feels real, as does Billy’s adorable friend (Stuart Wells) in the role of Actual Homosexual.

It isn’t really a ballet movie–the training scenes are fairly perfunctory. Ballet is a way of talking about the end of mine-town masculinity, the transition from the sex roles of an industrial economy to those of a service and entertainment economy. That’s fine, that’s a thing I’d watch a movie about, probably, but aside from a few characterization issues (the script has Billy’s girl friend degrade herself for his affection and then vanish, because her future isn’t really that important) the real thing that set me against this film was its sentimentality. I understand that it’s an underdog film so some degree of sentiment is inherent in the structure, but Billy Elliot almost always makes the wrong choice, for the saccharine over the convincing. The capper here is the moment when Billy wins a place at a prestigious dance school not by his dancing, but by talking about his dancing. (Spoilers or whatever, but you’ll know from early on what kind of movie this is, so I can’t imagine there’s much doubt about whether he’ll get in.) The film actually taunts you with the correct choice–a posh teacher asks Billy what he loves about the ballet, or what he feels when he dances or something, and he says, “Dunno,” because he’s angry and confused and not actually a scriptwriter and, honestly, why should he have to be? Why would these people want or expect him to be? But then, having said what this character should say in this moment, he pauses. And he gives this awful Oscar-reel speech about his dance feelings, and I felt soiled. If the film had allowed Billy, or even just his father, to feel degraded by this performance I would have respected it, but no, this is an inspirational movie so you have to have your inspirational speech. Yeesh.

Julie “Molly Weasley” Walters is quite fun as his ballet teacher, so there’s that.

Picture of an old-timey CB radio receiver via Wikimedia Commons.

March 12, 2019
I Review a Collection of Pre-WWI Socialist Fairy Tales
Next Post 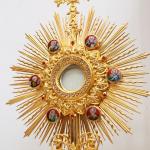 March 26, 2019 Medieval Eucharistic Piety, And My Own: They Recognized Him in the Breaking of the Bread
Browse Our Archives
get the latest from
Eve Tushnet
Sign up for our newsletter
POPULAR AT PATHEOS Catholic
1

Catholic
"Minari" Is a Portrait of Childhood--And of Several...
Eve Tushnet

Pope Francis condemns religious extremism in visit to...
After a meeting with the Grand Ayatollah Ali al-Sistani who is the...
view all Catholic blogs
Copyright 2008-2020, Patheos. All rights reserved.