“A Gimlet Eye Beneath a Chapel Veil”: My tribute to Antonia White

“A Gimlet Eye Beneath a Chapel Veil”: My tribute to Antonia White May 12, 2019 Eve Tushnet

at the University Bookman:

“We work to-day to turn out, not accomplished young women, nor agreeable wives, but soldiers of Christ, accustomed to hardship and ridicule and ingratitude.”

These words express the mission of the Convent of the Five Wounds, where nine-year-old Nanda Grey is sent shortly before World War I. Nanda, the daughter of a recent convert to Catholicism, plunges eagerly into the world of the Five Wounds—a world where the only storybooks allowed are martyrs’ lives (“the pressing to death of the Blessed Margaret Clitheroe had nearly turned her sturdy stomach”), and the pupils do penances so God will make them victorious against their hockey rivals.

Frost in May, Antonia White’s novel drawing on her own convent education in the years leading up to World War I, layers satire, anguish, and tenderness with exceptional delicacy. The school novel is always a novel of the gap between what’s taught and what’s learned. The faith of the Convent of the Five Wounds is sentimental, it’s cruel, it turns truths into propaganda and breaks children’s spirits in the name of humility. And yet it’s also beautiful. 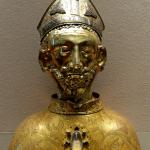 May 14, 2019 Notes from a "Pilgrimage to Hostage Relics"
Browse Our Archives
get the latest from
Eve Tushnet
Sign up for our newsletter
POPULAR AT PATHEOS Catholic
1