A Child’s Garden of Anarchy

A couple years ago, my friend’s toddler invented a game he could make his mother play. “Mama, lie down!” (She did this happily, let me tell you.) “Okay, mama. You are a beached whale. And I’m a police officer giving you a ticket.”

Kids are cops, this is the conventional wisdom. Kids love rules and playacting that they get to make and enforce the rules; in their play they treat rules and enforcement as ends in themselves. The purpose of having a “bad guy” is to have somebody for the good guy to chase and arrest (or ticket). Kids’ tv and books tell the same stories: Paw Patrol, the good (if sometimes unskilled at driving) officers of Busytown who catch spaghetti-stealing warthogs, the police vans and cars in every book catering to the vehicle-obsessed toddler. This same toddler who ticketed the beached whale went as a police car for Halloween and I must say, it was adorable. There are little carved-out spaces of safe chaos: Curious George and his unmortified passions; the Cat in the Hat; Rotten Ralph, if he’s still a thing. But mostly Matt Yglesias is right when he says, “Four year-old culture is soaked in uncritical celebration of law enforcement and troubling authoritarian tropes.”

In later years kids’ lit starts to suggest there’s fun to be had–fun, and responsibilities, which kids also love–in rejecting the world of rules and normal authorities. Since I’ve been re-reading the books I loved at various ages I’ve been struck by the division between two kinds of children’s or YA lit about rebellious, underworld communities: one kind about anarchy, and one kind about anarchism.

Anarchy books are about the fun had by rogue, adultless kids within the communities they make by scheming and inventing. The Pippi Longstocking books are anarchy books, set in the little criminal queendom of the Villa Villekula. Two of my all-time favorite kids’ books, The Borribles and The Borribles Go for Broke, are anarchy books. The Borribles were children once, but they ran away, grew pointy elf ears for whatever reason, and now live outside the law. They can be hurt or killed, but they will never age. The greatest tragedy for a Borrible is to have his or her ears clipped, because once the ears are clipped, the Borrible begins to grow up. Borrible proverbs include wisdom like, “That which falls off the back of a lorry belongs to the one who follows the lorry.” Their chief proverb and traditional farewell is, “Don’t get caught.”

I love these grubby, sometimes harrowing adventure books. I mean at one point the Borribles befriend an adult, a tramp who can escape any brush with the law because he smells so utterly unbearable, and he sings them his signature song:

(Was anything better than the children’s room of a 1980s library? They just threw anything in there!)

Anarchism books focus on the building of a community. They’re books about learning and coming into one’s own, about the compromises and patience required to band together, about hard lessons and new skills. People my age might maybe think of Walter Dean Myers’s The Young Landlords, although tbh I don’t remember that book well enough to be sure, as well as the books I’m about to discuss.

I’d say that in general, anarchy books have younger protagonists. They’re much more fantastical, and have a cheerful pessimism about human nature. Anarchism books have better intentions and (usually) greater optimism. They get you emotionally involved in the drama of education and peacemaking. They’re hopeful, in a way that anarchy books don’t bother to be or actively reject: hopeful about the transformation of the world, not simply the preservation of a few small pockets of criminal childhood. But because of their strenuous optimism, I suspect their hopeful plots are less persuasive.

Rachel Manija Brown and her readers recently truffled up two examples from the early ’80s: The Grounding of Group 6, a YA novel about a group of teens whose parents send them to an “alternative boarding school” which is really a pretext for their murder; and The War Between the Pitiful Teachers and the Splendid Kids, a kids’ book about, as you may have guessed, war between teachers and kids.

I loved both of these books when I first read them. They are both by teachers, if I recall correctly–Julian Thompson, who wrote Grounding, helped start an alternative school with teens in the late ’70s. This may explain why they sway further than you might expect into the “anarchism” realm, with its good intentions and unconvincing plots. Thompson actually wrote a whole bunch of these “teens build their own community after rejecting the corrupted and damaging world of their parents.” Some (A Question of Survival) hit much more heavily on the evils of the adult world; some (The Taking of Mariasburg) focused on the building of the teen community. Grounding is more in the middle, though weighted toward anarchism, and it’s the one I loved the best.

To be honest, I didn’t love it, on re-reading. It’s “wholesome” in the sexually-progressive Vox sense and all the kids are super thoughtful and hardworking from the very beginning. I love that Thompson showed the way hard, manual work can satisfy, when it’s work you’re responsible for–when you have both outside accountability, and a say in the work’s purpose. I enjoyed the utter weirdness of making one girl psychic but not making her psychic powers affect the plot in any major way. I have never met a human being as nice as these kids, who were raised by parents who want to kill them. None of them really have to overcome their upbringing; one of them struggles with trust for like two minutes and then becomes as sweet-natured and dutiful and community-minded as the rest. They all pair off neatly and the teacher-student sex is something the student girl pushes for, because she’s unusually mature, as literally every teen girl who wants to have sex with the adult man in a position of authority over her will tell you. There is no optimism like heterooptimism….

The War Between the Pitiful Teachers and the Splendid Kids falls into an in-between category, if memory serves (I haven’t re-read this one in a very long time), though I think its subpar sequel, Skinny Malinky Leads the War for Kidness, does more with the community-building/anarchism aspect, including the hard lessons the rebel kid learns about the cruelty of his own side and the human dignity of even the conformists. I recently re-read another in-between book, Scott Sanders’s Engineer of Beasts, a sci-fi dystopian tale of a delinquent orphan named Mooch and her longing for living animals in an environmentally-devastated world where they’ve been replaced by mechanical replicas. Mooch and her comrades have the angry energy of some of the anarchy books, but she is able to find a haven with an empathetic scientist in a nature preserve. There’s healing in Engineer, a characteristic quality of anarchism books, as well as the willful dirtiness and antireason of anarchy books. I wasn’t sure how I’d feel about revisiting it as an adult, but I still found Mooch and her baffled, raging sorrow quite moving; and the book also offers the simple pleasures of talking coyote robots, unrequited delinquent love, and plots to cover the city in trash.

What are the other books you all loved which could plausibly fall into these categories? What are the newer iterations (and variations) on these subgenres, for those born after the Cold War? What else would a kid love, who loves this kind of book? 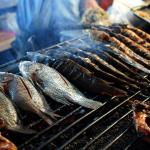 May 6, 2019
Two Charcoal Fires, Two Words for Love: Ron Belgau on Peter and Jesus by the Sea of Tiberias
Next Post

May 12, 2019 "A Gimlet Eye Beneath a Chapel Veil": My tribute to Antonia White
Browse Our Archives
Follow Us!

Catholics: They Are Not Coming Back...Unless...
Thin Places
Related posts from Eve Tushnet

Catholic
Yea, Thou I Walk Through the Tiny Scandinavian...
Eve Tushnet