I Need You Like Tab Needs Rum September 24, 2019 Eve Tushnet

I watched Desperately Seeking Susan, the 1985… is it a woman’s picture????… in which bored housewife Roberta Glass (deer-faced, yearning Rosanna Arquette) becomes obsessed with the imagined romantic life of schemey drifter Susan (Madonna!). It’s mostly a delight, from the very first hyperfeminine scene of Roberta waxing her leg. The producers and one of the writers were women, and it’s directed to the max by Susan “Smithereens” Seidelman.

Roberta and Susan have the film’s greatest chemistry, which is both a strength and a weakness–we’re supposed to root for Roberta to ditch her husband and get with “Dez” (Aidan Quinn), but even bracketing the divorce angle “Dez” has essentially no personality, and it’s hard to ignore that sparks fly whenever Roberta encounters Susan but sparks kinda… wriggle limply… whenever she’s with a dude. Late in the game Roberta protests, “I’m not a prostitute! And I’m not a lesbian” and it’s like… but you’re kind of a lesbian, no? “Dez” does own a beautiful cat but that is not the same as being Madonna.

Anyway it’s filmed in glorious neon, God bless you Michael Mann, and the plot is stripped to the bone so we can spend more time basking in the giant mood that is 1980s New York movie clothing. Seidelman has a weird tic of introducing people into a scene by following them from the waist down, which I guess does call even more attention to their style. There’s an awful suburban party where both sexes wear pink and aqua (man, remember aqua? remember when people would just wear aqua right out in public?), and a foot chase bathed in melting tones of lime green neon. I die, I live again.

Roberta buys Susan’s discarded jacket… Roberta gazes achingly at Susan’s photo, then sinks beneath the foamy black waters of her bubble bath… Susan herself isn’t actually an especially interesting character but this is the tale of Roberta’s rebirth, and Arquette is perfect at both the comedy and the heartache. It’s a grimy-sexy film–we see Susan use a bus-stop bathroom hand dryer to air out her armpits. It can be on the nose (Susan, answering Roberta’s phone: “Glass house”) and delightfully contextless (“Cigars? cigarettes?… Tofutti?”). There’s a Mafia stalker with haystack hair, and he’s genuinely quite snaky and menacing. There’s an astonishingly 1980s Movie New York “apartment” with a giant kung-fu mural and two freestanding turquoise doors.

Good grief, I enjoyed this. Even the recurring use of concussion as plot device (tonight, on Head Injury Theater! Filmed in Traum-o-Vision) becomes pure in the service of such pleasure. 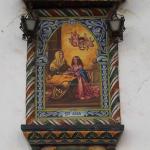 September 25, 2019 Some Notes from the Catholic Imagination Conference 2K19
Browse Our Archives
get the latest from
Eve Tushnet
Sign up for our newsletter
POPULAR AT PATHEOS Catholic
1

Catholic
"The Native American Struggle for Survival in a...
Eve Tushnet