Cat’s Eye: Three Stephen King stories linked by Drew Barrymore (eh ok) and A CAT (yes!). The first two are genuinely horrifying and tense. “Quitters, Inc” is kind of a cheesy story, about a man who enters a quit-smoking program with… extremely effective incentives. There’s even a party hallucination scene with dancing cigarette packs. But director Lewis Teague keeps the story taut and unsettling. Cat content: medium, the cat is tortured to demonstrate the program’s evil methods. “The Ledge” is mostly just about how incredibly awful it would be to have to walk around a skyscraper on a tiny ledge. But that’s very awful! Cat content: perfunctory, the villain bets on whether a cat can cross a busy street, thus demonstrating that he’s a heartless fiend obsessed with gambling.

Both of these stories felt like fairy tales, but fairy tales for adults–and then the final story, about a little girl being protected from a hobgoblin by her pet cat, felt like extremely gentle children’s “horror.” The pacing got much slacker, it seemed to me, the plot held no surprises, and I just could not care about this at all. I admit that if you aren’t bored by the whole story, the final confrontation between cat and goblin has fun touches like the use of a record player as a weapon. And I can see why if you watched this film as a kid, it would be this final segment which made you “hug [your] Pound Puppy” in terror. Cat content: maximal!

Pumpkinhead: Don’t let the childlike title fool you. This is a hard ride on a dark night. Ed (Lance Henriksen) lives alone in the backwoods with his little boy. He loves that kid; the film lets you feel their bond and their trusting devotion to one another. Yet there’s a shadow over this love. We see it when Ed bends over his boy to help the kid wash his hands: His hunching silhouette looks eerily similar to the monster Ed saw, when he was a child himself, killing a man who kept insisting that he was innocent.

Soon enough a bunch of rich ’80s jerkface teens from The City roar up with their motorbikes. In an unexpected twist, only one of them is actually a jerkface! But it is Jerkface, of course, who commits motorbike manslaughter. Man, I’m working for ironic distance here, but it’s hard to think about the scene where Jerk accidentally runs over Ed’s son. Ed, in devastation, calls up the legendary local vengeance demon, Pumpkinhead. (Roll with it.) The local witch, Haggis (ok this I think you can laugh at), who is composed entirely of spiderwebs and old-age makeup, warns Ed that the price of Pumpkinhead’s vengeance is too high. Ed, of course, learns only too late that she is right.

Okay, so once Pumpkinhead starts making with the vengeance, the film gets slasher-like, never my favorite subgenre. Stalk stalk kill kill. But several elements let this movie punch way above its weight class. It’s full of ’80s visual pleasures, teetering on the edge between sublime and cheesy: the mist-hung pumpkin patch in the dead late fall, the witchiest witch cottage which ever did witch, the extremely tactile and visceral creature effects; the abandoned church, moonlight streaming through its broken cross-shaped window. The fact that most of the rich teens actually try to do the right thing also makes their terrified deaths more painful. And Ed’s raw bereavement is simply harrowing. Lance Henriksen is phenomenal as he moves from love to rage to regret.

This is one of those horror flicks where you think it’ll be a fun time at the popcorn palace, and the next thing you know, you might never be happy again.

The Inheritance: The only non-’80s entry in this post. Does far too little with its terrific premise. Five black families are holding a joint reunion in the snowy hills, and their ne’er-do-well children, plus respectful daughter Karen (Golden Brooks), head to the family cabin hoping to hit up “the Elders” for some cash. But after a night of hard cousin-on-cousin partying, and a spooky message appearing in bloody letters on the window, the Elders arrive and tell the young folks the true history of their families’ wealth. An African with mysterious powers has protected them since slavery times, but in order to secure his goodwill, they must sacrifice their children.

The costumes are fantastic, and really create an Afro-horror vibe which hints at the movie this might have been. There isn’t enough exploration of what this all means–I definitely don’t need “We take our anger out on our children because of slavery!!” or really any moral, but I do need some richer texture to the themes of intergenerational violence, or the way violence and protection can come from the same source, or something. Show me how the families’ daily interactions have been warped by this centuries-long decision to sacrifice their personal children to secure the wealth of the family collective.

The pacing is flat-out bad. A white couple is introduced and then killed off without even the sense that their abrupt dispatch is meant to be funny. Once the family story is told, it’s just a cavalcade of chasing, shrieking, wandering, chasing and shrieking again, with no sense that any individual action scene has a point. (They’re safe! No, wait, they’re just in a different room. Here we go again….)

Less repetitive chasing and screaming, more closely-observed emotion. Just give me one moment as recognizable, tender, and sad as Ed washing his kid’s hands.

Of Unknown Origin: This may not be the best killer-rat movie there is. But it sure is the killer-rattiest.

Honestly? I loved this. I have a huge inexplicable love of killer-rat flicks anyway–I got a huge gleeful grin on my face whenever we got shock close-ups of this thing’s hideous yellow teeth, viscous fur, or pink paws tipped with sharp glassy claws. The ’80s were, I think, killer rat movie central, and this thing goes hard, telling the story of… mergers executive??? idk, Bart (Peter Weller), and his life-wrecking battle with a rat the size of a daggone koala. (Size comparison via Final Girl, who turned me on to this movie.)

The cuts are weirdly abrupt and sometimes drain the tension rather than increasing it. The movie also suffers from the usual killer-rat-flick problem of confusing action sequences, using tight close-ups to hide the (I assume) rat puppet. The characters are all unlikeable rich people doing unlikeable rich things. AND YET Peter Weller is genuinely terrific, readin’ his Moby-Dick and growing increasingly wild-eyed and unshaven. And the rat is so awful! It’s just a very effective rat and I hated it and wanted Bart to git it ’til it knew it was gotten. ETA: I should note that Bart lures a stray cat into the house to do his dirty work, and yes, we see that cat’s unhappy end.

We get rat’s-eye view or, as we call it in the business, “ratcam.” We get a business dinner which Bart ruins with a series of Rat Facts which make him sound very knowledgeable, but also very deranged. There might be some thematic stuff about how the battle for survival makes your previous rich-executive concerns seem trivial, or total loss as rebirth, or whatever, but do I care? No. This is a movie that knows what it is about and that is, in the words of the magazine Bart reads, “RATS: The Devil’s Lapdogs.”

October 4, 2019
Dentistry as a Corporal Work of Mercy: I'm in America Magazine
Next Post 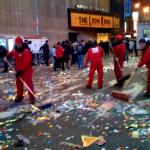 October 5, 2019 I'll Always Love a Guilty Party
Browse Our Archives
get the latest from
Eve Tushnet
Sign up for our newsletter
POPULAR AT PATHEOS Catholic
1