James C. Scott, in 1992’s Domination and the Arts of Resistance: Hidden Transcripts, argues that behind the public face of every society there is a counternarrative written by the subordinate classes. This “hidden transcript” is in dialogue with the public face but always elusive, concealing its rebellion. “Parasite,” the new genre-bending comedy/horror/thriller from Bong Joon-ho (“The Host,” “Snowpiercer”), makes this “hidden transcript” literal in its tale of a hilltop mansion that hides the secrets of its household help.

We begin at the bottom of the hill, with the Kim family. We first see them in the classically “hidden transcript” act of poaching—although this is 2019, so what they’re poaching is wifi. The Kims hang their socks in the window of their semibasement to dry; they battle a stinkbug infestation as they frantically fold pizza boxes in order to make enough cash to survive. Then a friend arrives bearing two things: a heavy “scholar’s rock,” which is believed to bring wealth; and a job for the son, Ki-woo (Woo-sik Choi), as the tutor of a wealthy family’s daughter. A few forged university documents and the son is on his way up that hill.

On Scott’s account, the more severe the society’s repression of its underclass, the more violent the fantasies of that subjugated class, and the more carefully they must disguise their true emotions and thoughts in order to survive. The top and bottom of society become unintelligible to one another: the top develops codes, rituals, manners, which a member of the underclass can rarely successfully mimic, while the underclass displays only a compliant smile, hiding the teeth. The Kims insinuate themselves into the life of the Park family, steadily grifting upward until every Kim is working for the family in one capacity or another. As the families intertwine, economically and perhaps sexually, who is feeding off of whom? 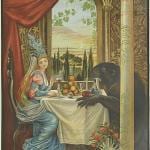 December 4, 2019 I'd Sell My Soul for Total Control: Staying Gay in the Church of Self-Improvement
Browse Our Archives
get the latest from
Eve Tushnet
Sign up for our newsletter
POPULAR AT PATHEOS Catholic
1

Blackberry Winter: The Folklore of Spring Snow
Here in Green Ridge, the snow has been falling thickly since just...
view all Catholic blogs
Copyright 2008-2021, Patheos. All rights reserved.
error: Content is protected !!