Lured: Lucille Ball stars as a dance-hall girl turned undercover detective! A serial killer is stalking the women of London via the personals ads… and one of the suspects is none other than the great Boris Karloff! This movie is pure pleasure. I’d never seen Ball in anything before and she’s a gem. She’s brassy and funny, able to swirl a gown or filch a gun with equal aplomb. Karloff is of course oozily frightening. There’s some of the era’s requisite psychoanalysis (the killer must have read… Baudelaire!), but it’s OTT enough that it’s enjoyable as camp rather than clotting up the cotton candy. Streaming on Kanopy, so you may be able to watch it on your library card.

Breaking Surface: This Scandinavian film is a perfectly serviceable tale of two semi-estranged sisters whose scuba adventure takes a grim turn after a rockslide. It was tense. The sisters were easy to cheer for. That’s about it, though–I’d hoped for the underwater sublime of Sea Fever plus the complex interpersonal loyalties and cruelties of The Descent, whereas this is pretty much a straightforward suspense flick. Possibly still streaming as part of the AFI European Union festival.

Smooth Talk: Laura Dern stars in this mid-’80s adaptation of Joyce Oates’s “Where Are You Going, Where Have You Been?” Dern is believably self-absorbed, unguided; a lazy suburban summer haze hangs in the air. Treat Williams gives a fantastic physical performance as a man with his eye on a 14-year-old girl: he’s like a sleazy marionette, all weird hanging angles, his eyes behind sunglasses. He’s got to do too much monologuing toward the end, and I’m not sure the film’s coda really hits the note of “that strange, sad summer” that it was heading for, but if anything in this description intrigues you it’s worth a watch. Streaming at AFI.

Ma: A bunch of contemporary high-schoolers get a Gen X woman (Octavia Spencer) to buy them some booze. Before they know it they’re hanging out all the time in her basement, calling her “Ma,” partying down as she blasts “Funkytown” and does the Robot and hands out shots. But, and wait while I blow your mind, this middle-aged lady who hangs around drunk teenagers all the time is not completely stable! …All the best moments from this movie were in the trailer, and yet I still found it an enjoyable popcorn horror–with a haunting undertow due to Spencer’s performance, alternately yearning, scheming, and dead-eyed.  Ma takes the standard “prank gone wrong/reunion revenge” horror plotline and really thinks through what kind of person would still be that stuck in teenage traumas twenty-plus years later, as well as what kind of person prefers to be surrounded solely by deciduous youth.

You Kill Me: A comedy in which Ben Kingsley (man, this set of reviews is all about marquee names in unexpected roles) plays an alcoholic hit man sent by his crime family to sober up on the other side of the country. Kingsley’s great, Tea Leoni is a charmer as his girlfriend, I assumed from her haircut and the repeated obnoxious “I’m not gaaaaaaaaaay” humor that this was from the late ’90s but in fact I’ve just forgotten the late 2000s entirely I guess. (And nothing of value was lost.) Anyway I did laugh, but I wanted an actual moral arc. If this really were from the ’90s I bet it would’ve been one of those “cats discover moral gravity” flicks, like (heart emoji, name tag emoji) Grosse Pointe Blank. 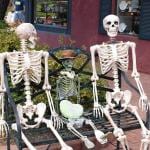 December 8, 2020 Parting Glances: I watch "Summer of '85"
Browse Our Archives
get the latest from
Eve Tushnet
Sign up for our newsletter
POPULAR AT PATHEOS Catholic
1

Marty the Manipulator: Sociopaths in Ministry
Here’s a story about what happens when a parish gives a manipulator...
view all Catholic blogs
Copyright 2008-2021, Patheos. All rights reserved.
error: Content is protected !!