Actions to Fight ISIS Genocide of Christians, Others

In my last blog post I talked about passivity/denial versus advocacy/action. The behavior of the German churches in WWII that sing hymns louder to drown out the cries of the Jews is being repeated today in the face of ISIS’ genocide by some American Christians. Watch the film “Sing a Little Louder” and share it with your friends, fellow church members, and pastors.

Now it is time to take action. And the actions suggested in this blog post should be taken as soon as possible, because time is running out — both existentially, for the Assyrian Christians and other religious minorities, but also in a more literal sense, as you will see below.

First and foremost, the battle against ISIS is spiritual warfare. If the Enemy ever used any proxies for his mission to “kill, steal, and destroy,” it is the Islamic State. Though some remain in denial about the evil we face, and pray  just “for peace,” the Biblical mandate for Christians (not governments, not militaries ) is to battle — not against flesh and blood — “but against principalities, against powers, against the rulers of the darkness of this world, against spiritual wickedness in high places.” (Eph 6: 12)

In my day job as the Religious Liberty Program Director at the Institute on Religion and Democracy, I launched a new initiative to encourage committed prayer and fasting against this evil. You can read more about it and access some resources for prayer, such as 5 lessons we can learn from St. Patrick about spiritual warfare, and praying the Psalms for the persecuted church, on the “This Day We Fight” page of IRD’s website.

3 Things You Can Do

In addition to praying, there are, of course, many things you can do to support the Iraqi and Syrian Christians and others that do not involve supporting congressional resolutions. If you are too scrupulous to be involved in a political issue, by all means, stay on your knees and pray for the rest of us. Or support the numerous organizations that are helping the refugees on the ground in Iraqi Kurdistan, Jordan, Turkey, and elsewhere. But if you also believe in the value of making a moral stand as a country, to defend the weak and powerless and to clearly identify evil — things for which our country used to be known — read on.

As I said in my previous post and alluded to above, time is of the essence. The Omnibus bill signed by President Obama on December 18, 2015 contained a provision requiring Secretary Kerry to provide an evaluation to Congress of “the persecution of, including attacks against, Christians and people of other religions in the Middle East” and determine whether such attacks constitute genocide. That report is required within 90 days from the bill’s passage, in other words, March 17, 2016. It would put far greater pressure on the Administration’s determination if Congress passes a resolution declaring genocide before this deadline.

There are three things you can to do specifically support the efforts of U.S. Representatives Jeff Fortenberry (R-NE) and Anna Eshoo (D-CA), the co-chairs of the Religious Minorities in the Middle East Caucus in Congress:

a. Thank Them: It doesn’t matter if you are a constituent or not– let Fortenberry and Eshoo know you appreciate what they are doing for persecuted Christians, Yazidis, and other religious minorities. Even though snail mail is slow to Capitol Hill, a personal note would be ideal. A line in the address indicating Re: Religious Minorities in the Middle East Caucus will help your note get delivered to the right staff person. Contact info for Eshoo indicates that correspondence via U.S.P.S. should be sent to her Palo Alto office.Fortenberry’s contact page also gives various options for sending mail. Alternately, you can send an email or a faxed photocopy of a handwritten note (yes, they actually still use fax machines on the Hill!).

b. Pray: In addition to thanking these members, you can support them by praying for them and for the success of their efforts. It is so important to have legislators in Congress that care about the fate of persecuted Christians and others and that are willing to be the ones out front in pushing policy.

The good news is that at this writing 196 members of the U.S. House of Representatives from both sides of the aisle are urging President Obama’s government to declare events in Syria and Iraq as genocide. But more are needed. 218 co-sponsors are needed as a majority to ensure passage of the resolution in the House. (After that, we need to move on to the Senate and get a resolution passed there, as well.)

See if your own member of Congress is among the sponsors. If so, contact him or her and thank them. Urge them to also speak out publicly, write op eds, and encourage their fellow members to sign on.

Other original co-sponsors of the resolution are U.S. Representatives Trent Franks (R-AZ), Daniel Lipinski (D-IL), Jeff Denham (R-CA), and Juan Vargas (D-CA). If one of these is your Congressman, they deserve special thanks!

If your member of Congress is NOT a co-sponsor, you know what to do! Call their office and/or email and urge them to become a sponsor immediately! If you read the resolution, you will find all of the talking points that you need to demonstrate why it’s needed. Ask your friends, family, fellow church members, etc. to pressure their Congressperson.

Send your message to President Obama and Secretary of State John Kerry, urging them to find a determination of genocide perpetrated by ISIS against Christians, Yazidis, and all endangered and persecuted religious minorities. You can refer to H.Con.Res.75 and  you can refer to what other nations have done — particularly since the U.S. resolution was actually the model for the successfully passed resolution by the European Union.

What do you think? Will you try any or all of these 3 actions? If so, please share what you do to encourage others.

Or do you think it is fruitless to pass resolutions declaring genocide? And if so, what do you think the U.S. government should do, if anything, to help the Christians, Yazidis, and other religious minorities being targeted by ISIS? As for me, I want to see a unanimously passed resolution on genocide in Congress, and to see the United States support the most vulnerable and threatened people of Iraq and Syria. 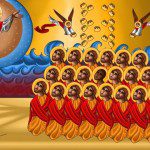 February 26, 2016 The Greater Tide and the Bloodstained Shore
Recent Comments
0 | Leave a Comment
Browse Our Archives
get the latest from
Faith and Chelsen
Sign up for our newsletter
POPULAR AT PATHEOS Evangelical
1

No, Religious Conservatives Didn't Cause Church...
Cranach
Books by This Author Books by Faith McDonnell