The Greater Tide and the Bloodstained Shore

Their minds were free. their hearts were brave.
They kept their promise to the grave.
(“The Greater Tide,” Attalus)

“Let no man write my epitaph.”

That’s not much of a problem when it comes to 21st century martyrdom. Memorials and tributes to today’s Christians who have died for the faith is definitely a niche market. A small niche market.

For instance, on Friday night, February 26, at 7PM, a group will gather outside The White House for a candlelight vigil to commemorate the brutal murder of the 21 Christians by ISIS in Libya on February 15, 2015. Outside of the DC NGO/Religious Freedom and Human Rights community and the Coptic Church, do many people remember that it was just over a year ago that the Islamic State slaughtered 20 Copts from Egypt along with an African man who, witnessing their faith, chose Christ and death over Islam on a Libyan beach?

Perhaps there will be a similar vigil in April. The 19th of that month is the anniversary of the death of some 30 Ethiopian Christians by ISIS on the bloodstained Libyan beach.

I always think of the persecuted members of the Body of Christ when we pray with the Book of Common Prayer:

For all who have died in the communion of your Church,
and those whose faith is known to you alone, that, with all the
saints, they may have rest in that place where there is no pain
or grief, but life eternal, we pray to you, O Lord.

Some of those persecuted or who have died for the faith are known. Some are even the subjects of books or films. The Coptic Orthodox Church canonized the 21 Christians murdered by ISIS as martyrs and saints. The icon created by Tony Rezk, at the top of this post, is the official image “to commemorate their supreme witness.”

But how many emaciated North Korean Christians have died in the DPRK’s nightmarish labor camps and gas chambers (yes, you read that right) with no one to write their epitaph? And who, in this age when visiting Cuba is now the sexy thing for American presidents and everyone else to do remember the defiant shouts of “Viva Cuba! Viva Christo Rey!” that sprang up in Cuban prison yards until they were silenced by the firing squad?

There will be martyrs’ crowns for all of these faithful ones from all over the world, known and unknown, in heaven. But what tribute is there on earth for the millions who remain faithful unto death?

Davey told me that he was “deeply moved by the accounts of those who died in Rome.” In fact, one of the Martyrs of Lyons, tortured and killed during the reign of Marcus Aurelius, was Attalus, for whom the band is named.

“It’s important for Christians, especially in the West, to look back at those countless individuals who paid the ultimate price, because we still stand on their shoulders,” says Davey. And, he added, that is is also important “to see how other Christians around the world are paying that price still today.”

The song that Davey wrote some years ago (featured on an EP by the same name in 2010), is now featured on Attalus’ first studio album Into the Sea, (Facedown Records, 2015). “The Greater Tide” echoes powerfully the martyrdom of all of those who have died for the sake of the Cross, but particularly the men on the Libyan seashore:

When Davey sings, “I hear a memory upon the wind. a song of long forgotten men. who lost their lives beneath the tide. and woke up on the other side,” I think of the vast tide of evil being perpetrated by ISIS across the Middle East and beyond.

“Come hear the tale and stand amazed at those who rest beneath the waves.” Although ISIS thought to terrorize and discourage Christians by releasing their horrific video — “the tale” — God used it to “amaze” people all over the world. In fact, the Body of Christ has grown and been strengthened, especially in Egypt, where many rededicated their lives to Christ as a result.

The 21 martyrs refused to deny their faith, refused the possibility of saving their own lives by converting to Islam. As one after another’s lifeblood was spilled upon the sand, particularly moving was the 21st martyr, now identified as Mathew Ayairga from Chad. As reported by Voice of the Martyrs:

On camera, one of the terrorists asked Matthew, “Do you reject Christ?”

“Their God is my God,” he responded, and he became one of the 21 men laying down their lives for their faith in Christ.

As “The Greater Tide” recounts, “Their minds were free. Their hearts were brave. They kept their promise to the grave.”

The rest of the song describes various kinds of martyrdom, “Some faced the sword. some faced the rack. some burned alive inside the flames,” and declares, “but heroes all, both great and small. They proved their faith was not in vain.”

Again “The Greater Tide” is hauntingly similar to the death of the 21 martyrs when it says, “Those humble men. those children dear. beneath a crushing weight they cried that saving Name of Him who comes bringing forth a greater Tide.” As the knife of ISIS was brought to the throat of each of the 21, it was “Lord Jesus Christ,” the “saving Name” that they cried.

In Rezk’s beautiful icon, the martyrs kneel on the seashore, still wearing the orange jumpsuits of their captivity, but now adorned with the scarlet sashes symbolizing their shed blood. Jesus welcomes them from “a greater Tide,” that rises from the blood red sea-waves of death.

The song finishes triumphantly with a powerful instrumental section to reinforce the lyrics. “Come hear the tale and stand amazed at those who dance upon the waves. Their minds are new, their hearts are safe, upon that Sea beyond the grave.” Not only the 21 dance upon the waves, but millennia of martyrs, who in the Book of Revelation are identified as “a great multitude that no one could count, from every nation, tribe, people, and language.”

I have broken up the song in order to demonstrate how it memorializes our persecuted brothers and sisters, but listen to the whole thing here. Better yet, buy the whole album. it’s all good. 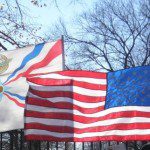 February 20, 2016
Actions to Fight ISIS Genocide of Christians, Others
Next Post 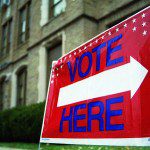 March 1, 2016 A Prayer for Super Tuesday
Recent Comments
0 | Leave a Comment
Browse Our Archives
get the latest from
Faith and Chelsen
Sign up for our newsletter
POPULAR AT PATHEOS Evangelical
1