(Below is a modified version of a piece recently published in the International Policy Digest. Publishing permission has been granted by the author.) 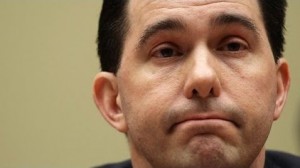 Wisconsin Gov. Scott Walker’s ideology is too partisan and inconsistent, and both his major initiatives and image have been unpopular at the state and national level. These factors may not ban him from a Republican presidential nomination, but it certainly bans him from a successful national campaign. Here’s why Walker simply cannot win:

Presidential candidates must run a reasonably middle-of-the-road campaign in order to appeal to the majority of Americans. Walker’s policies and statements have been hyper-partisan to the point of extremism.

For example, Walker stoked far-out fears that President Barack Obama is Muslim. When asked about whether or not President Obama was a Christian, Walker responded by saying he “did not know.” This statement came despite being informed that President Obama has clarified his religious beliefs several times.

Walker has tried to push through the dogmatic Wisconsin Assembly Bill 237, banning abortions after 20 weeks, regardless of incest or rape. If an abortion is performed, the bill allows the father to sue the physician and/or mother for “distress.” Amongst his base, banning abortions in cases of incest and rape is highly unusual, supported only by a small percentage of Americans; suing a physician and/or mother is unheard of.

Scott Walker often refers to his background as a Baptist minister’s son. He’s an Evangelical who told The Christian Post:

“[My faith] plays a key role in my life in general, not just in politics… the larger context, not only the policy decisions I make, but how I make them, how I interact with people, how I treat people; all of those things are, without a doubt, driven by my faith.”

Walker may have claimed he “did not know” whether or not President Obama was a Christian, but Walker himself is missing out on the key Christian principles of forgiveness, understanding, concern for the outcast and downtrodden, penance, and accepting that people may change over time.

For example, Scott Walker has both created prison overcrowding with excessively harsh sentences and decried overcrowding as a “threat” to “our public safety.” Walker claims Wisconsin is safer with limited parole opportunities and “truth in sentencing” laws that create longer incarceration periods, but the data shows otherwise. Head of the Prison Ministry Project and minister at the First Congregational United Church of Christ in Madison stated: “What has happened is that the Parole Commission has essentially ended parole—which was not the intention of the sentencing judges.”

Walker consistently preaches: “We need to get government out of the way and back in the hands of the American people.” But what could be more intrusive than legislators peering into the homes and the bedrooms of American citizens?

In New Hampshire, Walker “made clear” he “does not support a House bill that bans the National Security Agency’s mass surveillance program.” Despite his “small government” mantra, when it came time to decide, he supported the most “big brother” program “big government” has.

Walker claims he’s trying to decrease the number of abortions by limiting reproductive rights, but the vast bulk of scientific research says otherwise. Studies have shown again and again, the best way to decrease the number of abortions is to support birth control coverage, something he’s actively fought against. As Julia K. Stronks and Jeffrey F. Peipert, an evangelical Christian, political science professor and a Jewish, family-planning physician reported last year, to make abortions an anomaly, we have to work to prevent unplanned pregnancies.

Walker has also worked to pass numerous bills further suppressing reproductive rights, like supporting the repeal of the Contraceptive Equity law, and trying to end “all funding of family planning clinics which offer contraceptive care”—going so far as to dismantle clinics without abortion services. Nationally, about 3/5 of Americans oppose prohibitions against federally funding health clinics with reproductive care.

Scott Walker narrowly survived a serious attempt to throw him out of office—not a good sign for a politician hoping to make it to the national stage. 56% of Wisconsin’s voters say they disapprove of his job as governor and the majority of Wisconsinites believe Wisconsin is “headed down the wrong track.”

Walker’s “right to work” union busting gathered only the minority’s support and Walker’s had to fight blowback for outsourcing jobs. Worse still, Walker’s boasted about all of the opposition he faced instead of addressing criticisms seriously. In response to a question about how he’d handle ISIS, Walker compared union workers to terrorists: “If I can take on 100,000 protesters, I can do the same across the globe.”

In his effort to tear apart Wisconsin’s unions, Scott Walker also took on the state’s religious groups who stood up to defend Wisconsin’s workers:

Roman Catholic bishops came out on the side of the unions, urging the governor to protect worker’s rights. Many mainline pastors, including Lutherans, Episcopalians, Presbyterians, Methodists, Congregationalists, and American Baptists have written letters, issued statements, and preached sermons supporting labor, unions, and collective bargaining. In Madison, interfaith prayers and proclamations have upheld and encouraged the teachers, police, firefighters, and other public employees in their resistance to the governor’s plan to break their union.

Scott Walker abandoned his church, the Underwood Memorial Baptist Church in Wauwatosa, when they affiliated themselves with a nearby “gay-friendly” church. Walker supported bills prohibiting same-sex marriage and declaring same-sex unions in other states invalid and attempted to change the state constitution to redefine marriage. Same-sex marriage is now legal nationwide, and public support stands strongly behind same-sex marriage. Walker vehemently opposes the new legal standard, claiming the Supreme Court made a “grave mistake.”

Diana Butler Bass said it best. He might be a “preacher’s kid,” but don’t be fooled: “Scott Walker does not give a rip about pronouncements by the Roman Catholic Church, any Lutheran, Episcopal, or Methodist bishop, or the Protestant social justice pastors. These religious authorities, steeped in centuries of theology and Christian ethics mean absolutely nothing in Scott Walker’s world.”

The coming weeks are sure to see a campaign announcement from Walker and some initial excitement about the self-proclaimed “Washington outsider.” But, unfortunately for Walker, the luster is sure to fade as the nation probes his highly partisan positions and numerous inconsistencies. Walker’s unpopular positions and shrinking popularity in Wisconsin will only be amplified upon reaching the national stage.

Lindsey Bergholz works with Eleison Group. She is a graduate of the University of Miami, a law student at The George Washington University, and a bookworm who occasionally takes a break from geeking-out to volunteer with animals.

July 11, 2015
No more tears for the Confederate Flag
Next Post

July 23, 2015 Blessed are the Peacemakers: A Deal with Iran
Recent Comments
0 | Leave a Comment
Browse Our Archives
Related posts from Faithful Democrats