Donald Trump may have done more to nail Jesus to the cross than any president in America’s history. 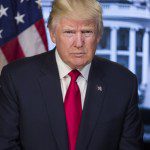 At February’s National Prayer Breakfast he quipped prayers were needed to boost the modest television ratings of his replacement on “The Apprentice.” He also pledged to destroy the Johnson Amendment, passed in 1954, that prohibits clergy from politicking from the pulpit.

It’s difficult to know whether the president was attempting humor when he asked those assembled to “pray for Arnold” Schwarzenegger, the new host of the reality show.  If he intended humor, it was sophomoric vulgarity.  It wasn’t Christian.  It appears to mock another child of God while trivializing the sacred gift of prayer to connect with and experience the Divine.  Yet many in the audience thought it funny.

The National Prayer Breakfast is intended to celebrate the nation’s rich spirituality where no faith tradition is elevated above another. The day is not meant as a platform for self-aggrandizement regardless of whether it is done at someone’s expense.  Prayer requires the sojourner to approach in humility and reverence.

Independent of trivializing the breakfast’s intent, the greater concern is the promise to destroy a safeguard overseen by the Internal Revenue Service (IRS) helping to maintain the separation of church and state.  Social conservatives have long lamented the taxing agency shouldn’t “limit” religious liberty by curtailing political speech or prohibit endorsements from the pulpit.

The separation of church and state goes back centuries.  It stems from concern that failing to have a metaphorical wall would expose the sacred to the tawdry, secular world.  An absence of separation permits the politically ambitious and unscrupulous to misuse the holy and divine to further self-serving purposes.

History has many examples.  The eventual adoption of Christianity as the official religion of the Roman Empire compromised Christianity as evidenced by wars, greed, colonialism, and antisemitism in the name of God.

Orthodox theologian Fr. Alexander Men observed, “At the beginning of the fourth century AD, the Roman Empire changed its tactics in its battle with Christianity.  It recognized Christianity, and even made it the state religion, but in so doing it imperceptibly subordinated Christianity to [the Empire].”

Fr. Men further reflected, “In many ways, this marked the beginning of a tragic period for the church, the period conventionally known as ‘Constantinian’, when the political authorities pursued their own aims in the name of Christ and of his church … when the emperors chained the church to their chariot, that oppression of the spirit began which led to religious-political dictatorship, and to ‘Christian’ persecutions of dissenters” (Men, Christianity for the Twenty-First Century – the Prophetic Writings of Alexander Men, Continuum Publishing Company, p. 121).

Henry VIII started the Church of England, in part, for self-preservation hoping to conceive a male heir to his throne through yet another marriage.  The scars from religion in a divided Catholic and Protestant Ireland remain.

In Russia today, the Orthodox Church has become an extension of Vladimir Putin’s foreign policy evidenced by its endorsements of military excursions into Ukraine, Georgia, and Syria.  Attacks on an independent press and free and transparent competitive elections has been done with Russian Orthodoxy’s approval.  Orthodox Russia, comparable to the events leading up to the 1917 Revolution, is without a moral or ethical compass.

Government misused Christianity to justify slavery laws in the United States.  Later scripture justified state segregation laws.  What will be the nature of presidential Executive Orders to “protect” religious liberty, if one is signed or a bill is passed by Congress?

The sad irony in repealing the Johnson Amendment is to make faith more polarizing, political, controversial and less worthy of respect in the public square.  Its repeal will not nurture faith and religious liberty.  It is likely to further a judgemental social conservative American-Christianity encouraging fake, marginalized faith.

If Trump is successful in repealing the Johnson Amendment, he will have obstructed and misinterpreted Christ’s message.  His actions will have been fueled by spiritual-hubris and religious-insecurity.  Christ and America deserve better.

Paul P. Jesep is an attorney, corporate chaplain, and former US Government Relations Director for His Beatitude Metropolitan Myfody of the Ukrainian Autocephalous Orthodox Church of Kyiv and All Rus-Ukraine.  He is author of “Lost Sense of Self & the Ethics Crisis” and “Crucifying Jesus  and Secularizing America – the Nation of Faith without Wisdom.”

December 22, 2016
Hope during a time of uncertainty comes from within
Next Post

Against The Bloviating Justifiers Of Eucharistic...
Clint Schnekloth
Related posts from Faith With Wisdom