The Peace of Christ and Our Cosmic Battle

The Peace of Christ and Our Cosmic Battle April 17, 2013 Margaret Blume 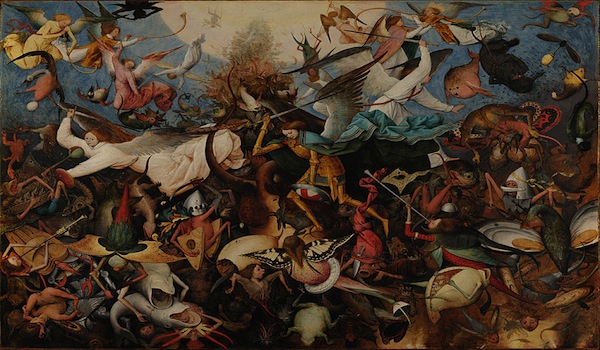 The Beinecke Rare Books library at Yale surprisingly has Thomas More’s original breviary, the one book he was allowed during his imprisonment in the Tower of London.  I was able to see it one April, and remember staring at Thomas’ own handwriting shining out his last prayer between the margins, and feeling how close he was, and also how distant.  At the end of the breviary, as the date of his death marched nearer, only the word “demones” appeared over and over again, scratched amidst the words of the Psalms.

We’ve somehow lost sight of the spiritual dimension to our moral struggles today.  It’s a sensibility we’d do well to recover, if we want to know the true nature of the enemy.  Origen, one of the great Eastern geniuses in the Christian theological tradition, finds in the violent wars of the Book of Joshua a way to open his congregation’s eyes to the spiritual war being waged within and without them, a universal conflict into which visible history gives only a glimmer.  The destruction and violence of human earthly wars are real events that only shadow the awe-full spiritual warfare raging hiddenly at the same time between principalities and powers. When we fight against other human beings, Origen preaches, we surrender to the powers of violence within our own souls:

The kingdoms of earth are not promised to you by the Gospels, but kingdoms of heaven. These kingdoms, however, are neither deserted nor abandoned; they have their own inhabitants, sinners and vile spirits, fugitive angels. Paul, sounding the apostolic trumpet, exhorts you to the battle against those who dwell there.  Just as Joshua said then that your war would be against the  Amorites and Perizzites and Hivites and Jebusites, likewise Paul also declares to you here, saying, “Your fight will not be against flesh and blood,” that is, we shall not fight in the same manner as the ancients fought. Nor are the battles in our land to be conducted against humans “but against sovereigns, against authorities, against the rulers of darkness of this world.

Quoting Paul, Origen exhorts his audience that they must complete the battle against sin in their own souls “even to the shedding of blood.”  But just as Joshua led the Israelites in battle against their enemies, so that they could cross the Jordan and enter the Promised Land, this war is the way to freedom:

Before the coming of our Lord and Savior, all those demons, undisturbed and secure, were occupying human spirits and ruled in their minds and bodies. But when “grace appeared” in the world, the mercy of God our Savior instructs us to live piously and purely in this world, separated from every  contagion of sin, so that each soul may receive its liberty and “the image of  God” in which it was created from the beginning.

Spiritual enemies fight with cunning and lies, and part of legion’s strategy, Origen warns, is to hide himself from men.  Christians pray in the “Our Father” that they not be led into temptation, for the evil that separates the soul from God is the source of all fear, and rightly terrifying. The Eastern Fathers understood temptations as Providential instruments, however, to bring the hostile powers in souls out into the open, since otherwise they cannot be exterminated.  Surely this is how Thomas More’s “demones” can be understood, emerging from their dark hiding places as the saint’s soul was purified for death.  The soul’s enemies are first put to bay by the truth that strips off their disguises, and Origen says that with his words, he wields the “spiritual sword of the Word of God” to draw the blood of the powers trying to harm his listeners.

Origen is notoriously a pacifist, and he never exhorts the soul to try to do battle against its enemies on its own, through its own violence.  The “strong man” has only been overcome on the Cross of Christ.  Christ took the enemy away from the midst of men, and fixed all that hates souls’ innocence to his own Cross, exposing legion openly and triumphing over their power by his death.  Human beings fight battles against their own demonic enemies and win freedom, Origen exhorts, only by joining themselves sacramentally to the power of Christ’s Cross.

The Cross is the only way to the Promised Land of peace.  At the end of the Book of Joshua, it is written that “the earth rested from wars,” and Origen asks how this can be spoken truthfully given the long bloody course of human history. He answers that these words prophesy the peace fulfilled in the Lord Jesus Christ alone:

Consider yourself – you have come to Jesus and through the grace of Baptism have attained the remission of sins; and now in you “the flesh” does not “fight against the spirit and the spirit against the flesh.”  Your land has ceased from wars if you still “carry around the death of Jesus Christ in your body” so that, after all battles have ceased in you, you may be made “peaceable” and you may be called “a child of God.”

A cosmic war rages, not only outside of human beings but also within their own souls, and it is more real and more terrifying than any of the horrible wars that destroy men’s bodies.  But, Origen comforts his congregation, they should not be afraid.  When they seek the peace of Christ, this gift will at times mean an interior war.  But the power of the Cross will make men free and at peace enough to taste the happiness of the Resurrection, in the simplicity of a breakfast together on the seashore.

[Painting of The Fall of the Rebel Angels From Wikipedia] 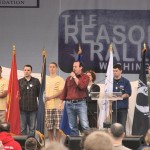 April 16, 2013
The Decline of Dawkins and the Dawn of Deliberative Doubt
Next Post 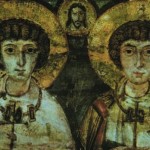 April 18, 2013 Why Don't We Talk About Friendship More?
Recent Comments
1 Comment | Leave a Comment
"bla bla bla. old or not. still works.no, wait. metaphysical pluralism still rules"
Sandro Wisdom Vasconcellos What We Are: Mind, Body, and ..."
"Soul is not matter. It is beyond the physical realms, It is at quantum mechanics ..."
Sandro Wisdom Vasconcellos What We Are: Mind, Body, and ..."
"This is yet another article that derails discussion of spiritual abuse into other very important, ..."
istavnit Overemphasizing Spiritual Abuse?
"I'm very interested in the matter of secularization; do you have other book suggestions along ..."
Luke Breuer Reading Recommendation: The Secular Revolution
Browse Our Archives
get the latest from
Evangelical
Sign up for our newsletter
POPULAR AT PATHEOS Evangelical
1

Four Tips for Reading the Book...
Crux Sola: Formed by Scripture to Live like Christ
Related posts from Fare Forward