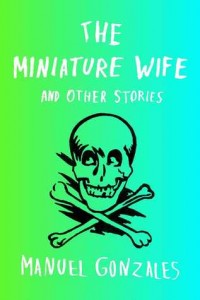 The Miniature Wife, Manuel Gonzales’ debut collection of short stories, begins with a line by W.B. Yeats: “Things fall apart.” Those three words are a fitting introduction to the eighteen stories that follow, in which a plane is hijacked, a soldier is beset by swamp monsters and robots, and zombies descend on a mall.

Whether you want to classify these stories as magical realist, speculative, or genre fiction, they certainly give us the pleasures of traversing well-worn ground to discover something new. They remind us that fiction doesn’t have to constrain itself to the realities of our world. And they take to heart the project of fiction: to show us what could be possible, and how that might make us feel.

Fantastic elements in fiction encourage us to read symbolically, and part of the appeal of these stories is encountering the many different voices of characters who consciously weigh the particular details of their experience against their larger – and often humorous – symbolic import. As an office worker, hopelessly in love with his married receptionist, narrates, “The zombie in me would like to make it clear that there is no zombie in me, per se. Would like to make it known that there is only me, in fact, and that all of me is zombie.” And if the likening of desk work drones to the shambling undead isn’t new, other conceits in the collection are delightfully refreshing – like the piece of art commissioned to commemorate the sinking of the African continent, or the dazzling, haughty, beer-drinking unicorn an envious man named Mano plots to steal from his neighbor Ralph in “One-Horned and Wild-Eyed” (with all its comic echoing of “Thou shall not covet thy neighbor’s donkey”).

So: things fall apart. But “One-Horned and Wild-Eyed,” among several other stories, is also deeply interested in the who or what that causes things to go to pieces. The unicorn works so well symbolically because it works so well literally: we see Mano neglect his wife and child to sneak off and gaze at the unicorn at all hours of the day and night. Meanwhile, Ralph’s wife laments, “Six years, I’ve been this man for six years, and I never told him he had to get a job, I never pushed him, though I sure as hell wouldn’t have minded…  Ha. Ha, ha, joke’s on me. Less than a week wit [the unicorn] and he’s already found a job to take care of it.” Similarly, other stories focus on the catalysts, the instigators, or the culpability of those who choose not to react in the face of catastrophe, like the passengers onboard the hijacked plane who allow themselves to sink into such a state of apathy and resignation that no one ever attempts to wrest back control of the plane – which has been circling the Texas airspace for twenty years.

It’s impossible to summarize the variety of situations and surprising emotional range of these stories. Yet there is a running theme: throughout the collection, characters find themselves uneasy about the legacy they’ll leave. Even as they’re preoccupied with reacting to their immediate situation, they’re rather anxious over what it is they’ll be most remembered for – whether that’s the invention of a plant-based vascular system intended as a replacement for human organs, or a miniature wife who, after her husband accidentally shrinks her down to the size of a coffee mug, promptly wages war against him and the miniaturizing company that employs him. In the face of adversity, most characters come to rely on only themselves. As the lone man fleeing a zombie invasion declares, “I can pull myself to my feet and run and run harder and faster than I’ve ever run before. I can make it to those doors and burst through them and into the parking lot and find my car. I can outrun those bastards and start this all over. I will watch less television. I will spend more time outside. I will foster stray animals and donate to charity walk-a-thons and look both ways at intersections.” Here, Gonzales’s brilliance lies in showing the absurdity at the core of self-reliance: that it’s a position as funny as it is bleak.

Reading these stories, I was struck by their contrast to one of my deepest beliefs: that anyone who follows Christ is never alone. During Exodus, God was always present as a cloud by day and a pillar of fire by night to guide his people’s way. Christians celebrate how God entered into our world at Christmas, taking on flesh in order to dwell in our midst. Furthermore, he chooses to be present still; Paul writes that our very bodies are his temples. That I could be thinking through my convictions while worrying about a family that was getting turned into werewolves demonstrates how well the stories work to invite the reader to bring his or her own interpretive faculties to the table. Or as Flannery O’Connor writes, “The truer the symbol, the deeper it leads you, the more meaning it opens up.”

The inventiveness and wit of The Miniature Wife set it apart from the lurking hordes of less thoughtful genre fiction, and you might find yourself thinking about what you’ve read long after you’ve turned its pages. You can read three of the stories online: One-Horned and Wild-Eyed, The Animal House, and Cash to a Killing.

February 25, 2014 The Shortcomings of "Love What You Do"
Recent Comments
0 | Leave a Comment
Browse Our Archives
get the latest from
Evangelical
Sign up for our newsletter
POPULAR AT PATHEOS Evangelical
1