The Culture We Live in 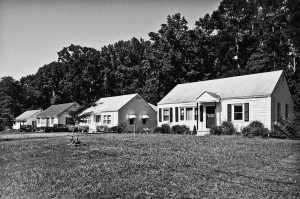 A Field Guide to American Houses: The Definative Guide to Identifying and  Understanding America’s Domestic Architecture by Virginia Savage McAlester

Of the well-known basic physical needs, “shelter” generates the most durable artifacts. You can see clothing from Colonial America in museums, and there are ways of finding old recipe-books, but you’ll almost never see a person wearing two-hundred year old pants, and you’ll certainly never find and eat leftovers of such age. Yet there are still people who live in structures built in George Washington’s lifetime. Our houses, need to stand up to rain, wind, snow, floods, and earthquakes, so we build them to last for generations. But preserved houses are rare: for the most part, we keep living in houses, or we tear them down. Houses are modified, redecorated, renovated, and extended. Residential architecture is not a portal to the past, like a museum. It’s more a winding pathway, something that’s continually updated and reinterpreted, like folk music.

The Language of Architecture

Yet most of us don’t know dentils from dormers, and can’t get more specific than centuries when we guess at construction dates. Here’s where a good field guide comes in handy: the Field Guide to American Houses, Second Edition, by Virginia Savage McAlester. The first edition came out in the mid-80s, and became something like a handbook for a revival of traditional styles after the ranch-house era. This latest edition has an expanded section on midcentury modern styles. It also has a full chapter on McMansions, which readers will find quite helpful in constructing tirades against subdivisions. The Field Guide is written for “house watchers,” a term I hadn’t heard before but apparently is like bird watching, only much easier. The intended audience is people who enjoy walking around in neighborhoods and looking at the outsides of houses, so most of its details have to do with external ornamentation, rather than interior layouts or stylings. (The book is 800 pages long and quite heavy, so pedestrians may prefer to use it as a home reference instead of taking it to the field.) If you don’t know much architectural terminology, as I didn’t when I purchased the book, it’s very helpful to read the book from the beginning, since the earliest styles are among the simplest. Read in this way, the Field Guide presents a coherent story about how culture evolves, and how it’s braided together with technology and politics. Aesthetic problems are solved by material innovations as often as they’re created by political action.

The story begins with boxes. By and large, American houses in the eighteenth century had rectangular frames and peaked roofs, with most of the decorative effort going into the front door. Colonial-era elites like Jefferson were good classicists, and had their aesthetic reasons for preferring symmetry and right angles. But there were also technological reasons: most houses were built with frames of heavy timber. Because it took a skilled craftsman to hew the joints between timbers, it was difficult and expensive to build anything other than a box. However, in the 1830s, some Chicagoans figured out how to make a sturdy house frame by nailing together two-by-fours. This “balloon framing” technique simplified construction enough that when Americans tired of boxy houses, they were able to build the complicated gables and turrets of the various Victorian styles, starting from about 1860.

The Victorian styles were popular styles, but were eclipsed and then replaced by styles preferred with the architectural elite at the dawn of the twentieth century. On the one hand, there was a traditionalism based on historical research, exemplified by the Colonial Revival and the Beaux Arts styles. On the other hand, the earliest architectural modernism: Frank Lloyd Wright and associated Chicago architects developed the Prairie style, and the Craftsman (or Bungalow) style emerged in California. Why did the Victorian styles disappear? Certainly, architects were experimenting with new techniques. Probably, there was an element of “mere fashion” to the transition. And yet there’s a hint of another, subtler technological shift behind the stylistic change. The Field Guide rightly credits Andrew Jackson Downing’s widely influential pattern books with inspiring several waves of Romantic architecture. It also mentions that the popularization of historical styles was helped along by the ability to print and distribute books of photographs. Could it be that the Victorian style looks better in Downing-esque line drawings, but suffers compared to Colonial Revival in black and white photography? Would this be enough to contribute to outmoding an entire style?

The reader can perform her own experiment here: in each chapter of the Field Guide, the essential features of a style are shown in beautiful line drawings, and then real-world examples and variations on the style are shown in small black and white pictures. I think the Victorian examples lose much more than more symmetrical styles: so much of the Victorian aesthetic has to do with textures and colors, which are very hard to make out in the photographs, but are wonderfully brought out in the drawings. It would take a different sort of book to settle the question of the degree to which photography contributed to the passing of the Victorian home style, but the extensive notes and bibliography will point the reader to many of the relevant primary sources.

The government managed the next shift in American architecture. In the nineteenth century, Congress shaped the towns of the West by selling cheap land in particular patterns and lot sizes. In the twentieth century, the Feds got into the home loan business, with drastic effects. During the Great Depression, FDR’s Federal Housing Administration set boundaries for size, cost, and efficiency of the homes it would insure mortgages for, and published guidebooks with titles such as Principles of Planning Small Houses. Builders followed these guides closely. After WWII, the FHA decided to avoid backing loans for International or Contemporary styles, preferring ranch houses with traditional detailing. That the FHA discouraged modern styles was a kind of self-fulfilling prophecy, and for the first time high-style architecture seriously diverged from middle-class realities. These loan policies more or less determined the look and feel of suburbs in the second half of the twentieth century.

Such suburbs often come in for ridicule, especially in America’s hip urban enclaves. And yet I think they improve quite a lot with time. The trees grow in, the residents plant gardens, the houses are decorated and personalized: one family adds a deck, another adds a pool, and another adds a hedge. The neighborhood takes on personality. There’s still a major issue with walkability: very few people have a reason to walk through these suburbs, and often the only pedestrians are joggers and dog walkers. Even so, it’s striking how comparatively little control city people have over the appearance of their dwellings: they have to depend on architects and landlords to style the neighborhood. Houses, then, are sites where ordinary people literally shape the culture. The better we understand these contributions, the more we can replace scorn with discernment.