The Unprepared-For Death Is Not Worth Dying 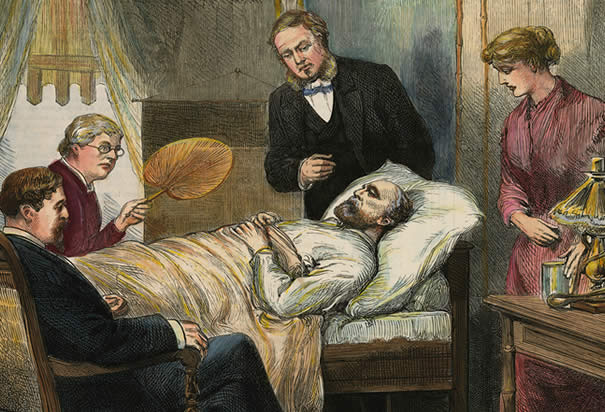 The traditional Litany of Saints ends with a series of petitions to God that he might “save his people” from various things: evil, sin, the snares of the devil. Among them is also the entreaty to be saved, freed (”libera nos”), from “a sudden and unprovided death.” Much of traditional piety understood death, that ultimate moment of human existence, as one in dire need of grace and attention. In the last petition of the Angelic Salutation—better known as the Hail Mary— for example, Catholics ask that the Mother of God pray for us now “and at the hour of our death.” St. Joseph also has been invoked throughout the ages to intercede at the throne of God to obtain a “happy death,” that is, one provided for spiritually.

When Joseph Ratzinger wrote his book Eschatology on the theology of the “Last Things,” some years before he was Cardinal Ratzinger and later Pope Benedict, he noticed that in the modern secular world, people no longer wish to provide for their death. In fact, they do not wish to think about death at all. Thus they sanitize it—one American newspaper forbade the word “death” as part of their style sheet. Or they euphemize it—no one dies anymore, he or she “passes on.” Or at least they hide it away—no one dies at home any more, only in hospitals or other “specialized” institutions. No longer does one pray for a foreseen and provided-for death, Ratzinger says. On the contrary, the modern “Litany of Unbelievers” would ask for the opposite, for “a sudden and unprovided-for death, O Lord.” In Ratzinger’s assessment, our contemporaries believe that “death really ought to happen at a stroke, and leave no time for reflection or suffering.”

At the root of this modern tabooing of death is the fear of suffering. Death is the ultimate suffering, which, as the Christian knows, ushers in the ultimate transition from death to life. There is a parallel transformation that happens in suffering and death. When suffering is seen as something to be avoided, as always and everywhere evil, so too death is something to be avoided, hated, denied, and hidden. Yet when suffering is seen as transformative and redemptive, then death is no longer to be avoided and hated, but it becomes “Sister Death,” in St. Francis’s celebrated phrase. Or as St. Paul puts it, “For me to live is Christ and death is gain.” For the Christian, death is no longer the transition from the life of eating, drinking, and being merry into the land of shadows. It becomes instead, to quote Cardinal Newman’s tombstone, the transition “from shadows and images into truth.”

The modern world rightly seeks cures to illnesses and advances in medical care. Not even the most cynical and localist Luddite would deny that improvements in medicine are good. However, the underpinning of much of this advancement does not have the flourishing of the human being as its goal. Today’s superficial medical practice often seeks to anesthetize modern man from the basic human reality of suffering. This desire led as intelligent a man as the late Christopher Hitchens to attack as elusive a target as Blessed Mother Teresa of Calcutta, labeling her “Hell’s Angel” in a 1994 television documentary. From the beginning to the end of his vitriol, Hitchens manifests his complete inability to understand the work of Mother Teresa. Hers was not a mission to alleviate the pain and suffering of the world, or to eliminate its poverty and squalor. It was a mission to bring the redemptive love of Christ into the lives of the poorest of the poor and so transform their suffering.

And here we come to the heart of the Gospel and its transforming grace. When God sent his Son to redeem the world, he could have done so through just about any means. He chose, however, to send his Son in human form, taking up the form of a slave, and in that form he took up suffering. Suffering, as a human experience, is utterly meaningless. Pain, alternatively, is eminently practical. Pain tells us something is wrong. I put my hand on the hot stove, and it hurts, which is good, lest I lose my hand. We might even take on some pain for the sake of healing—much of medicine works that way. But suffering—the psychological, emotional, existential experience—is in and of itself meaningless. It has no practical human value. But Christ changes all of that. As the French playwright Paul Claudel rightly asserts, “God did not come to get rid of suffering, nor to explain it way. He came to fill it with his presence.” In the Passion and Cross, Christ takes up the most meaningless of human experiences and makes it the most meaningful. He makes suffering the means of salvation for the world.

This transformation of human suffering, however, is not the exclusive property of the Word Incarnate. Rather, he extends that transformation to every believer. This leads St. Paul to attest, “I rejoice in my sufferings for your sake, and in my flesh I complete what is lacking in Christ’s afflictions for the sake of his body, that is, the church.” This is not to assert, in any way, that the sacrifice of Christ on the Cross is somehow deficient and in need of completion. Rather, as St. Paul says elsewhere:

Do you not know that all of us who have been baptized into Christ Jesus were baptized into his death? We were buried therefore with him by baptism into death, so that as Christ was raised from the dead by the glory of the Father, we too might walk in newness of life.

Human suffering is thus transformed and given a new light by the work and life of Christ. This, we might say, is the single-most significant “evolution” that human nature has achieved, one not noticed by Darwin and his acolytes.

As suffering is transformed, so is death. One of the more beautiful and lesser-known teachings of the Church about Christ refers to his dead body. Physical death is defined philosophically as the separation of body and soul. Therefore, at Christ’s death, his human soul departed his human body. The union of the divine nature to his dead body, however, was not dissolved. God is present to Christ’s Body even in death. And as St. Paul reminds us, we are the Body of Christ. Even in death, God is present, and his presence transforms death from something of a final defeat into the way to eternal life.

Again, St. Paul says that for him “death is gain.” Death is only gain after Christ has redeemed it and made it the way to eternal life. But this transition from death to life is not reserved only for the ultimate moment of earthly existence. From the earliest days of the Church, the Christian life, the life of conversion, has been described as a journey from spiritual death to spiritual life. The call to conversion—inaugurated by Christ himself: “Repent, believe in the Gospel”—is the call to wake up from the death of sin and live the glorious freedom of the children of God. Scripture repeatedly speaks of sin and death as parallel categories. So also life and redemption are linked in the very Resurrection of Christ. The conversion to which he calls us means the death of the old man and the birth of the new.

Birth and death, as everyone knows, entail pain and suffering. Modern man, in his escape from suffering, has also eschewed the felt-need of conversion. Here we find the rub for the modern Christian, and the truly countercultural import of the Christian in the world. The battleground is not on the steps of the Capitol or the halls of academia, but is, as Dostoyevsky proclaimed, in the human heart. The living out of Christianity first takes place in this transformation of suffering into something redemptive, in this experience of sin as spiritual death and the Gospel as spiritual life. The experience of suffering in the life of the believer so often is the opening up of the heart to the need for God such that one comes to know his need for God.

Suffering is the transition that awakens the desire in us for eternal life. As we come to know privation through the absence of desired goods that suffering entails, we learn to aspire to the fullness of good that is God, and so are able to choose a liberated dependence on God himself. Such sanctification takes place by keeping our death “before our eyes always,” as St. Benedict counseled his monks 1500 years ago. He said this not out of morbidity, but in a realistic vision that is opened by the experience of suffering so transformed. This transition then takes place in the humble acceptance of trials and adversity, not out of an exaggerated sense of one’s own worthlessness, but in a crucified vision that no longer thinks as human beings do, but as God does. Earthly life and its trials are the training ground of a new life that begins here and now in the life of grace, which changes radically in the death we all will face, and is enjoyed eternally with God outside of all time and space.

Echoing Socrates, we might profess that the unprepared-for death is not worth dying. The passage from physical life to physical death is the natural transition that all mortal creatures, by definition, undergo. For the followers of Christ, we do not wait to undergo the transformation from death to life at that final moment. We seek to live it out in response to the Gospel, in a life informed by Faith and enlivened by Charity. We do this through a transformed mind and heart in the face of suffering. We pray for the grace to prepare for death, to see all of life as a preparation for that day that the early Christians did not call one’s “death day,” but rather the dies natalis, one’s birth day: the day one springs from this so-called life into the life of the world to come.

From an unprepared and sudden death, O Lord, save us.