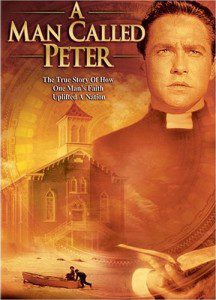 HOLLYWOOD studios are increasingly aware there is a market for religious films.

So lately, they have been making a point of creating special video labels, such as Fox Faith, and reissuing classic religious films – in addition to newer efforts. Here are a few such films.

There is a big, big problem with the cover of this DVD: it shows Peter Marshall (Richard Todd) wearing a suspiciously large clerical collar, even though the film makes a big, big deal of the fact that Marshall – a popular Scottish Presbyterian minister who became chaplain to the United States Senate – was a spirited nonconformist who refused to wear such things.

But never mind the cover; this is easily one of the best religious films to ever come out of the Hollywood studios, and it’s definitely worth a look.

Based on a book by Peter’s wife Catherine (Jean Peters), the bulk of the film takes place in the 1930s and 1940s. But it reflects the heightened religiosity and the fusion of faith and politics during the Eisenhower era, as well. (It was in 1956 that the phrase ‘In God We Trust’ became mandatory on all U.S. currency.)

Todd delivers several sermons over the course of the film, and he recites them all with gusto, charm, wit and conviction. Even better, the DVD includes an audio recording of a half-hour Easter sermon delivered by the real Peter Marshall. Now that’s a bonus feature. 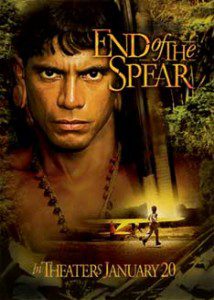 The former film is a documentary, and the latter is a dramatization. Both films tell the story of Nate Saint, Jim Elliot and the other missionaries who were martyred in Ecuador in 1956, and how their families were eventually reconciled to the natives who killed them.

Both features were directed by Jim Hanon, but they are remarkably different in style and tone. The documentary includes home-movie footage shot by the missionaries, in which the native Ecuadorians appear partly nude, but the dramatization keeps these characters dressed extremely modestly.

And while the documentary uses ’50s and ’70s rock’n’roll to capture the mood of the various eras, the drama sticks to 1930s jazz and classic opera.

Both films are quite moving, especially the documentary, but the differences in style – despite the fact that both films were made by essentially the same people – raise some interesting questions about the cultural and aesthetic expectations we bring to the films we watch. 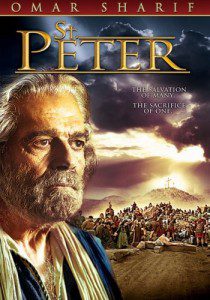 Many films are based on the gospels, but not that many are based on the Book of Acts. So the first half of this two-part TV-movie, which covers the resurrection appearances of Jesus and Peter’s role in the Jerusalem church, is inherently interesting.

The second half, which jumps ahead to Nero’s Rome and an entirely fictitious series of events leading up to Peter’s martyrdom, is essentially a rehash of Quo Vadis?, but it has its merits, too.

Anyone who has read their Bible will quibble with the film’s handling of some scenes; and even though the story spans more than 30 years, Omar Sharif, who is well into his 70s, plays both the young Peter and the old Peter; so you have to suspend your disbelief a bit more than usual in the earlier part of the film.

But there is no denying the sensitivity of his performance, as he plays a man humbled by the realization that, “if Jesus has continued to love me in spite of all the mistakes that I have made, then no man must feel unworthy of his love.”

July 2, 2007 Canadian box-office stats -- July 1
Recent Comments
1 Comment | Leave a Comment
Browse Our Archives
get the latest from
FilmChat
Sign up for our newsletter
POPULAR AT PATHEOS Entertainment
1