Warning: This post will reveal one of the key spoilers in Star Trek into Darkness. It’s not that big a spoiler, especially if you’ve been paying any attention to the buzz around that film for the past two years, but, if by any chance you have been avoiding the spoilers around that film, you may want to avoid this post, too. 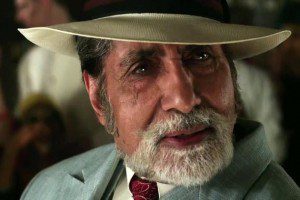 Two films in theatres right now feature significant characters who happen to be (1) villainous, or at the very least somewhat shady, and (2) members of an ethnic group that has sometimes been subject to stereotyping. In both films, the characters in question are played by members of an entirely different ethnic group — and this has puzzled some observers, who have asked if the films could have found a more creative but authentic way to navigate the issues raised by their source material.

First, Star Trek into Darkness. It was no real surprise when the film finally came out and the Benedict Cumberbatch character revealed that his real name was Khan. Given that Khan was originally played by the Latino actor Ricardo Montalban, pretty much everyone had assumed that the villain of this film would be Khan when it was revealed two years ago that J.J. Abrams wanted Benicio Del Toro for the part; when the deal with Del Toro fell through, Abrams then considered a few other Spanish or Latino actors before finally — and quite surprisingly — settling on the very English Cumberbatch.

The interesting thing here is that Khan himself is neither English nor Latino but vaguely Asian; his full name, Khan Noonien Singh, has Muslim and Sikh associations, and in the episode that introduced him back in 1967, he was described as both “probably a Sikh” and as “absolute ruler of more than a quarter of your world, from Asia through the Middle East.” Also, the superhuman beings who followed Khan were a fairly multicultural group; in one scene from that episode, Khan tries in vain to make contact with followers named Rodriguez, Ling and McPherson.

As Charlie Jane Anders wrote at i09 last year, when reports that Cumberbatch really was playing Khan began to make the rounds:

Making the ultimate representation of eugenics into a vaguely Asian villain played by a Latino was an oddly clever choice — it divorces his claims of genetic superiority from the real-life advocates of eugenics, and forces you to see the issue in a new light. For most of its history, eugenics was synoymous with “white superiority” — but Khan flies in the face of that, by giving us a eugenics experiment in which race is apparently not a factor. . . .

A color-blind eugenics program gets past the “white supremacy” aspects of eugenics to reach for the heart of why eugenics is so terrible — the very notion of one group of humans being innately better than another devalues us all. It dehumanizes all people, even the allegedly superior ones, by assigning to us a value based on arbitrary characteristics. It’s one more step into making us like cattle, who can be bred for certain characteristics. Or more like things, really.

So what happens when Khan is played by an indisputably white actor (with blue eyes, even)? And what happens when the new Star Trek film characterizes Khan not as someone who ruled over multiple racial groups with the help of an equally multi-racial band of accomplices but as someone who, in the young Spock’s words, committed “mass genocide”? You arguably lose the whole point of the character, and you undo the cleverness of the original episode by turning the villain into just another British bad guy. As Anders wrote last year, “It’s a little on the nose.”

Interestingly, the India-based website Firstpost Bollywood also devoted an entire post recently to the fact that Khan, “a superhuman from India”, was played by “the thoroughly Caucasian Benedict Cumberbatch” and not by one of the “many brown actors in the world at large and in Bollywood in particular”.

The post concludes by noting that, while the actor might not feed into current ethnic stereotypes, the character, as depicted in this film, might still do that:

Here’s what’s interesting about the choice that Abrams made: the man named Khan who reduces skyscrapers to rubble and terrorises Americans is a white man and not a bearded chap with an olive complexion who may be considered suspicious by airport security personnel in large parts of the world. He is, as Cumberbatch said in an interview, a “home-grown terrorist”. He doesn’t seem foreign, he’s doesn’t look like ‘the other’; in fact, he looks no different from the others who make up the American majority. But his name is Khan and he is here to wreak terror.

As Danielle Berrin notes at JewishJournal.com, Luhrman himself has said that he cast a non-Jewish actor as Meyer Wolfsheim — a fictitious gangster modeled after real-life gangster Arnold Rothstein — because he wanted to avoid the “broad, anti-Semitic” depiction of Wolfsheim in the original novel. Berrin goes on to ask:

Was there no way to portray Fitzgerald’s Jew as a Jew without the seamy stereotypes? In casting an Indian actor, Luhrmann effectively usurped the Jewishness of the character and managed to avoid it entirely. Save for his name, Luhrmann’s Wolfsheim is not identifiable as a Jew in any meaningful way.

On some level, this constitutes a denial of historical truth on the part of the director, even as it ethnically (and perhaps creatively) reimagines the role. Is Luhrmann trying to tell us ethnicities are interchangeable? That because Fitzgerald’s character was portrayed in anti-Semitic strokes he should not be portrayed as a Jew? Perhaps some see in this betrayal of the character’s essence a triumph against stereotype. But it seems more accurate to suggest that it illustrates the director’s own confusion and lack of imagination (which is actually quite stunning considering how brilliantly fresh the rest of the film is).

Berrin also notes that the decision to cast a non-Jew as the gangster makes little sense because other characters in the film actually talk about the character’s Jewishness when he isn’t onscreen, and she asks if Luhrman could have found a more successful way through this minefield by casting a “very talented and very conspicuously Jewish actor” in the part — someone like, say, Adrien Brody.

Oh, and in case you’re wondering, Firstpost Bollywood critic Nikhil Taneja praised The Great Gatsby as “the most Bollywood of Baz Luhrmann’s films” and said Bachchan’s brief performance in the film was a “pleasant surprise” and “undoubtedly one of the best-acted Indian cameos in Hollywood cinema so far.”

May 24, 2013
Godfrey Reggio's newest film to premiere in September
Next Post

May 29, 2013 Bible movie of the week: Samson and Delilah (1949)
Recent Comments
1 Comment | Leave a Comment
"This was a refreshing read. I'm an average fan of Hellboy but I'm also a ..."
Andrew Mathews Doug Jones on Hellboy and Christianity.
"Great interview! One thing I've wondered since watching Season 1 is why they didn't include ..."
A.J. Cattapan Interview: The Chosen writer-director Dallas Jenkins ..."
"Earth actually does exist in the Dark City universe. Early in the film when John ..."
Edward Clint Dark City and the ambiguous ending.
"I don't always agree with your opinions, but your reviews are never less than interesting ..."
Laura-Lee Rahn The top-grossing Italian movie of 2019: ..."
Browse Our Archives
get the latest from
FilmChat
Sign up for our newsletter
POPULAR AT PATHEOS Entertainment
1