Spielberg and Lucas on Ark of the Covenant traditions 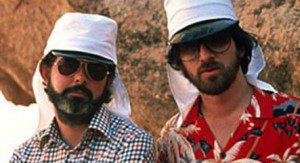 It’s been up on YouTube for almost three years now, but last week, for some reason, a vintage TV special on the making of Raiders of the Lost Ark (1981) began making the rounds on the internet.

I don’t believe I had ever seen it before, though I do recall a friend at school telling me about it and describing one sequence in it, in which Steven Spielberg tries to give Harrison Ford a passionate summary of where the story is going, only to have Ford abandon him mid-story to put some mustard on his hot dog or whatever.

I mention the special here because it includes a clip of Spielberg on the set of the film’s climax, explaining to some of the extras what the supernatural concept behind that climax is — and I was intrigued to hear Spielberg suggest that the film might actually differ from the traditions surrounding the Ark as he understands them.

You can watch the video for yourself below, but the relevant bit comes shortly after the 27-minute mark. In it, Spielberg tells the extras, who are dressed as Nazi soldiers:

If there is, in fact, a tradition according to which the tablets of the Law returned to God before the Ark was destroyed, I had never heard of it prior to this, but it certainly sounds like the sort of tradition that could have grown around the Ark.

The interesting thing for me is how Spielberg openly says that the movie disagrees with the tradition that he is familiar with.

As my friend Steven D. Greydanus has argued, one of the reasons Raiders of the Lost Ark towers above its sequels is because the film’s central plot device — the Ark of the Covenant — is no mere MacGuffin. Instead, it is a sacred Hebrew object that taps into “the quest for Jewish identity and imagination pervading Spielberg’s work.”

That’s certainly still there in the film, but it’s interesting to hear Spielberg admit, basically, that he compromised a bit, by following Lucas’s beliefs about the fate of the Ark and not whatever his own beliefs might be — and it’s also interesting to see that Spielberg felt compelled to tell the extras what the original tradition was.

Lucas, for his part, shows up briefly to say that the film’s climax was inspired by the fact that, within the Bible and perhaps other traditions as well, “it was always that when they opened the Ark, an event took place.” (See, e.g., I Samuel 6:19.)

The making-of special also talks about how Indiana Jones and his girlfriend Marion close their eyes when the Ark is opened and the ghosts rise up because, “here, the premise is that like Lot’s wife, looking will turn them to stone.”

I must admit I had never made that association before — I had always assumed that Indy could not look at the power of God and live for the same reason Moses and others could not do the same — but the Lot’s wife analogy certainly works.

Anyway, here is the special in its entirety. Enjoy:

December 3, 2013
Noah -- the Japanese trailer is now online
Next Post