Noah news round-up: a good first day in Mexico, the filmmakers talk about fear, grief, and literalism, and more 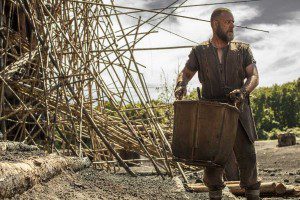 Several reviews of the film went online Thursday night (or Friday morning, if you live on the east coast) — you can read my own first review here — and it currently has a 73% score at Rotten Tomatoes.

The Associated Press has some interesting quotes from director Darren Aronofsky. For example, on his first reaction when he read the story as a child:

“The first time I read it, I got scared,” the director says. “I thought, ‘What if I’m not good enough to get on the boat?'”

And regarding the controversy over whether his film is a “literal” take on the story:

“It’s strange that the conversation for a little bit has turned into a controversy about literalism,” says Aronofsky. “What is literalism when it comes to interpreting and making an artistic representation of the text? Is Michelangelo’s David a literal interpretation of what David looked like?”

Hugh Hewitt has an extensive radio interview with Ari Handel, who co-wrote and co-produced the film with Aronofsky. Among other things, Handel talks about why they decided to make the Nephilim a major part of the film:

HH: How quickly did you settle on this? I mean, when did you decide that’s how we’re going to do it?

AH: Pretty early on, because we got to that line about the Nephilim, and we knew we had to deal with it. We couldn’t ignore it. How are we going to handle it? And that helped us get into this kind of tone, and we thought that tone was a really interesting one, and would be a really interesting one for modern audiences, because we’d be taking a Biblical epic, we’d be doing something that was grounded in the text, but that was completely unexpected and would let people see the story in a new light they hadn’t seen before, but not one that was just arbitrary, but one that came from Genesis.

He also comments on how the film draws the viewer’s attention to certain characters who do not get on the Ark:

AH: This is what this is about. At some point, if you’re going to do the Noah story, you’ve got to look at the fact that the characters who made it onto the boat had to deal with the fact that nobody else did, and that’s a painful idea. And no one wants to think about the people who didn’t make it onto the boat. People want to think about the people who did make it onto the boat. But the fact that people didn’t, and that hurts, well look, we know it grieves God’s heart to do this, and it must have grieved Noah’s heart and his family’s heart that these people didn’t make it on. There’s a lot of pain and suffering involved in this. It’s not a light idea. It’s a heavy idea. So we wanted to really make the audience feel that, and feel it not by having like a really mean, evil, nasty person not make it on, who we don’t have to have empathy for, but feel it for someone who we do have some empathy for, because these are all human beings.

The Telegraph, in England, for some reason quotes some things that Russell Crowe said in Brazil during his recent promotional visit to that country, e.g.:

“When I started this process, I probably had a very limited understanding of Noah, which I believe is true of most people,” Crowe told journalists in Rio de Janeiro, the third stop on his promotional tour.

“A lot of people think they know the story but what they recall is children’s stories from Sunday school and not what the Bible says.

“This story is contained in every religious text. Noah is in the Qu’ran. People from all over the world outside of religion have flood mythology.

“In my eyes, Noah is just a normal man and, as he begins to realise the full weight of the task he’s been given, it weighs down on him.”

The Wall Street Journal, interestingly, profiles not the writers, director or actors but the people who played a key role in the look of the film: production designer Mark Friedberg, cinematographer Matthew Libatique and visual effects supervisors Ben Snow and Mark Driscoll. It includes this interesting detail about the animals:

Mr. Aronofsky, who directed “Black Swan” and “Requiem for a Dream,” sought to avoid standard-issue creatures. “He didn’t want them to be the sort of animals you expect in a Noah’s Ark story,” Mr. Snow says. “We did a whole lot of research even into extinct animals, like Victorian drawings where they’d only heard descriptions of animals, and they came up with these crazy versions. We also looked for real animals but unusual ones. So we couldn’t have a male lion or a zebra or a giraffe. We’d have a springbok or something less obvious.

“We did put a few pachyderms in there,” he adds. “It’s actually something the studio requested. They wanted something the audience could latch on to.”

The Journal also has a slideshow that includes some behind-the-scenes shots.

And finally, The Los Angeles Times looks at how Aronofsky has been working on this story ever since a diorama of Noah’s Ark at the Museum of Jurassic Technology caught his eye 15 years ago.

My own interview with Aronofsky and Handel will go online next week. Stay tuned.